Another big gap between fishing sessions but by the end of April I was back in Brisbane for a few days and the weather was calm, cool and bright. As soon as I had time, I drove up to Bribie Island to see if the flathead where around. March and April always seem to produce plenty of good flathead from the flats around the island.

I hit my favourite spot – the muddy, weedy, sand flats to the south of the old oyster jetty, in front of the Sandstone Point Hotel, which is currently under development. This will be a huge pub when it is finished. I think it is great to see a development that seems to fit in with the natural landscape. My only disappointment was the wholesale removal of the native gum trees behind the mangrove line, to make way for the project. These used to provide a good break when the cold south-westerly winds blow.

I started a little after first light and a bit before dawn at about 6.00 am. I think this short window between getting light and the sun coming over the horizon is an excellent time to fish. The change in light triggers the feeding response and the low intensity means they are bold enough to chase lures and baits into the shallows.

A 2.0m high tide had passed at 4.09 am, so I was fishing the run out tide. The moon was about half full which meant that the tidal flow would not be that significant. There was about 50cm of water at the base of the mangroves, as I waded towards the old oyster jetty.

I was fishing with my very light spin rod – NS Blackhole 6’ SGII 602L Trout rod I picked up in Tumut last year. It is rated for 2 to 8lb line and 2 to 10 gram lures. My beloved Loomis GL2 had a fatal accident in 1770 and the gang at Jones Tackle are seeking out a replacement for me. In the meantime this light, fast action rod is great for flathead, bream and other estuary targets.

It was now about 6.45 am, I had rigged a GULP 4” Minnow soft plastic in the Pearl Watermelon colour on a 1/8th ounce, size 1 jighead and I was using just over a metre of 10lb breaking strain fluorocarbon leader.  I was casting ahead of me in to the shallows. The water was clear but a little cooler than it had been fishing at 1770, a few weeks before. I had just passed the cable crossing warning sign when I felt a faint grab at the soft plastic. I dropped the rod tip and paused but did not entice a strike. I cast back at the same spot and felt the same slight grab. I cast to the right – nothing. I cast to the left – nothing. Then I cast back along the original trajectory and paused with the soft plastic on the bottom, for a good ten seconds. When I lifted it the fish struck. It was a flathead – a little over 50cm. It was good to know persistence pays off. 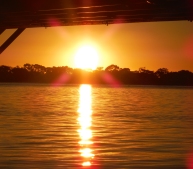 I waded under the jetty and slowly fished my way to the point where the shoreline turns the corner towards Sandstone Point. I paused here and threw a few casts along the drain that channels the run out tide round the corner and over the flats. I felt a couple mad grabs and swipes and realised that the Long Toms must be snapping at the soft plastic. I could not find a flathead in the drain so I moved on.

I waded along the gradually emerging sand bank until I was almost at the green channel marker. I stuck with the same soft plastic all the way. I then turned back to walk along the edge of the weed beds, in the direction of the jetty.

About half way back to the jetty, I felt a solid hit and paused. When I lifted it, the fish was hooked. It was another, slightly smaller 45cm flathead. I now had two in the bag, but would need at least one more to feed my mob.

I slowly moved north, casting and casting. After another 1 hour I still only had two fish. I was back at the jetty and the water was clear and almost still. It was now about 9.30 am and nearly low tide. I out in a few casts alongside the jetty. On about the third cast a very angry flathead slammed my soft plastic.  I subdued it and carefully pulled it ashore.

That was enough for me. Three fish, four nice fillets from each, that’s twelve good pieces of fish – which makes a very decent family meal. It took 3 hours to catch and about 12 minutes to eat. Good to be back on my home turf.