I have concluded that the bottom of the tide is my best chance of catching a fish on the flats around Bribie Island.  The fish must still be around on the higher tides but they seem to disperse over a larger area and it is much harder to know where to look for them. So on Tuesday I decided to only fish the last few hours of the run out tide.

I drove up to Bribie and waded out under the bridge at about 11.00 am. Low tide would be at about 3.00 pm but it was full moon, so it would be a fast running tide and would run out very quickly to a lower than usual low. I was fishing with my new G.Loomis short, light spinning rod with 8lb braid and a 10lb fluorocarbon leader.

I had promised the Mrs a few fish for a family event and she was relying on fresh flathead fillets for her recipe. This is usually the kiss of death for my fishing sessions, but not today.  I decided to try a different soft plastic and had found my last packet of Lucky Craft Mad Scientist Optishad soft plastic lures. Now everybody knows I love my GULPs but they really do not yet have a good paddle tail soft plastic. Their Swimmow shape is pretty good but a little too small and the Shaky shad is very hard to load on to a jighead. The Mad Scientist Optishad is a brilliant shape and size and comes in some great colours. I load it onto a 1/8th ounce size 1/0 hook jighead. As with so many good lures you probably will not find them in the big stores and may need to order them online. 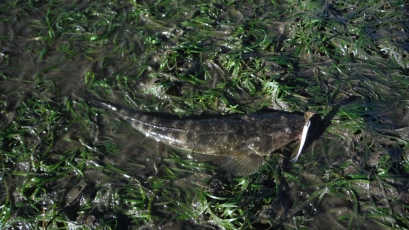 By 11.05 am I had my first flathead on the end of the line – just to the south of the old oyster jetty. It was about 38cm,  so I let it go and moved on. I caught another a few minutes later and this one was big enough to go in the bag. The next was about 55cm, close to the mouth of the drain that runs out from the Sandstone Point flats. Things slowed down. There was lots of very small bait around, sitting just over the weed beds. I swapped to a GULP 3“Minnow in the Smelt colour, which pretty closely resembled these small fish. A few casts later I found the biggest fish of the day – a 58cm flathead.

I continued to the channel marker, swapped back to the Mad Scientist Optishad and caught a couple of 45 cm long fish, just beside it.  I now had a full bag so I turned for home. On the way back to the car I caught and released another 8 flathead, most of which were legal size.

It seems that the fish have are now around in large numbers so it’s time to get out there.