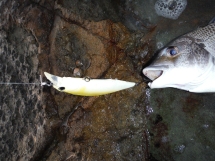 On Friday the wind was a 10-15 knot south-westerly. I woke to heavy rain at about 5.00 am and it was cold. I had decided to go back to Shark Bay but low tide would not be until about 10.00 am, so there was no hurry. I had breakfast and put on a few layers.

I drove down to Shark Bay again and headed out to the northern end of the rocks. It was about 6.30 am by the time I reached the fishing spot.I rigged up a DUO Realis Jerkbait 110 SP – which is a shallow running hard body that has caught tailor here for me before. I tied it on with 35lb fluorocarbon leader and threw it out. On about the third cast I felt a grab and then some resistance but it did not feel like a Tailor. I kept winding and was surprised to see a big bream attached to the lure.

I carried on fishing with the DUO lure, but it did not find me any tailor so I swapped to a DUO Pressbait Saira. DUO call this a ‘slim and long-bodied jig minnow’. It is basically a 50 gram, 175mm long slug with a wobble tail action. The long baitfish profile means it should attract everything from tailor to tuna, but today after about 30 casts, it had attracted nothing.

I switched down to the lighter rock fishing rig and a soft plastic Jerkshad on a ¼ ounce, 1/0 hook jighead. I fished this around, the drop off and in amongst the kelp beds. I felt a few grabs but could not connect so I dropped down to a small 3” Minnow soft plastic in the Banana Prawn colour. This soon found another smaller bream.

I moved south to the other side of the rocks. I started with the heavy rod and big soft plastics and gradually dropped down to the light rod and GULP 3” Minnows in various colours. I was now fishing 16lb fluorocarbon leader and 1/8th ounce, size 1 hook jighead. It was about 30 minutes to low tide and the swell seemed to be picking up. I changed up to a heavier 1/6th ounce 1/0 hook fine wire Breampro jighead and loaded up with a GULP Jerkshad in the BBQ Chicken colour.

This is a colour I have never tried before and subsequent events suggest it pays to try something new, from time to time. The bigger plastic and slightly heavier jighead meant I could put in a slightly longer cast. On about my third attempt, I landed it beyond the breaking waves and waited for it to sink. As it floated down I felt a gentle tug. I paused for a few seconds then lifted the rod tip and felt a fish. It took off along the line of the surf towards some kelp covered rocks. I played it for a while and it felt like a jewfish. Unfortunately, it managed to find a good tuft of kelp to wrap itself around and the line went slack.  When I got the jighead back the fine wire hook had straightened so I tied on a heavier gauge one and put on another BBQ Chicken Jerkshad.

It did not take long, perhaps 3 or 4 more casts, then I was on to another fish.  This one was a little smaller and less powerful. It made a long initial run but then I was able to turn its head and use the wave surges to bring it in. It was a beautiful school jewfish but I was not sure if it was big enough, so I took out the tape and checked. It was 73cm long and therefore big enough to keep for dinner in New South Wales.

I threw a few more casts and felt a few more bites but as the tide slackened, the bites stopped. Another rain shower came over so I cleaned up my fish and decided to make for the car.