The start of February usually marks the beginning of the real change in wind patterns on my home fishing patch – South East Queensland. The hot summer northerly winds are attacked by the cooler winter south-easterlies. The water temperature starts to drop very slightly and there is often some wild weather.

On Monday strong south-easterly winds were forecast to pick up from mid-morning. It was about a week after full moon and not a particularly big tide. I arrived at Bribie at about 5.15 am, to very grey skies that showed only the slightest evidence of first light. Low tide would be at 8.40 am, so sunrise at 5.20 am was about the perfect time to start fishing.

I waded out under the bridge and started casting with a GULP Jerkshad in the BBQ Chicken colour on a 1/8th ounce, 1/0 hook jighead. I like to concentrate on the area just south of the bridge when the lights are still on. There is a large piece of rocky reef which keeps boats away from this patch so it is usually undisturbed, overnight. This morning all I could catch was a piece of that reef, so I re-rigged with a GULP jerkshad in the Satay Chicken colour and moved on.

I passed the jetty and moved along the big sand bar that runs south, towards the furthest channel marker, that you can walk to. There were rays everywhere – they like to sit in the shallow water as the run out tide washes dinner into their path. Just where this sand bar turns left the water becomes slightly deeper and the weed beds are a little thicker. I was now standing in less than 50cm of water. I was casting along the edge of the weed when I clearly saw a flathead launch itself at the soft plastic. It missed. I dropped the rod tip and paused as the stirred up sand washed past. When the water cleared the flathead was sitting about 10 cm behind the clearly visible lure. It did not seem to want to strike. I decided to make the first move. I hopped the lure off the bottom, it lunged forward and grabbed the plastic. I dropped the rod tip, to let it get the soft plastic well inside its mouth and then lifted it again and set the hook in its jaw. It was a respectable 50cm flathead.

I fished around this area and moved further down towards the channel marker but could not find anymore. I saw a big shovel nose shark swimming in the shallows and a few small schools of squid. At about 7.45 am I turned for home and slowly walked back towards the bridge, casting as I went.

I swapped to my old favourite soft plastic – the GULP 4” Minnow in the Pearl Watermelon colour. Just to the south of the jetty something fast hit the lure and I hooked up. It was a small bream, about 28cm long. I released it. 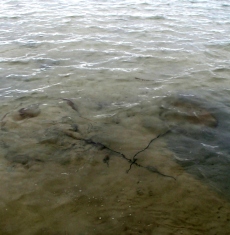 By 8.45 am I had passed the under the jetty and was fishing around the base of the stranded pylons, just to its north. My lure struck something and stopped dead. I pulled hard assuming it was the base of the pylon or an old crab pot. Gradually the object started to move and then wriggle and then it took off in a slow but powerful run. I thought it might be a ray but it was moving a little too quickly. I let it take line. There was no way to muscle a fish like this in on my light spin rod. I was pretty sure I had last re-rigged with 10lb fluorocarbon leader, so I would just have to be patient. We went back and forth for a few minutes and then I started to walk slowly backward towards the shore. This area is littered with rocks and bordered by the jetty pylons to the south, so it was a nerve racking fight. Eventually a big flathead appeared from the stirred up bottom and surrendered. I pulled her into the shallows and took a few photos. I did not have my tape, but by lining her up next to the rod I could see she was well over 75cm. I took a few quick photos and then watched her swim away. A great finale to what could have been a pretty slow session.