I was up early and keen to see if the fish were still there at Iluka Bluff. This time I was prepared with a few more good poppers and some 45lb leader. I drove out to the Bluff but almost as soon as I got out of the car the heavens really opened.  The rain eased off slightly and I put in a few casts but the swell was still around the 1.6m level. When the rain started pouring again I decided to retreat to my unit.

In the early afternoon I dropped in on Iluka Bait & Tackle which is now run by Ross Deakin. Ross has given the store a complete makeover and now has a really good range of soft plastics, jigheads, hard bodies, poppers, line, hooks, reels, fresh bait and everything else. He and his team can give you an update on what is being caught, locally. So if you need tackle, get it here and support a local business. You can also see what’s happening via their face book page. https://www.facebook.com/Iluka-Bait-and-Tackle-608266152650241/ .

I also visited the rock wall where despite the swell , keen fisherman had landed a few tuna on live garfish baits and big lures, when they had come in close enough.

By late afternoon the rain had stopped so I drove back around to the Bluff. I tied on a 110 mm Halco Roosta Popper in the Chrome Gold Black back colour.  It was about 4.30 pm and the wind and swell has eased a little by the skies were grey and the water very choppy. 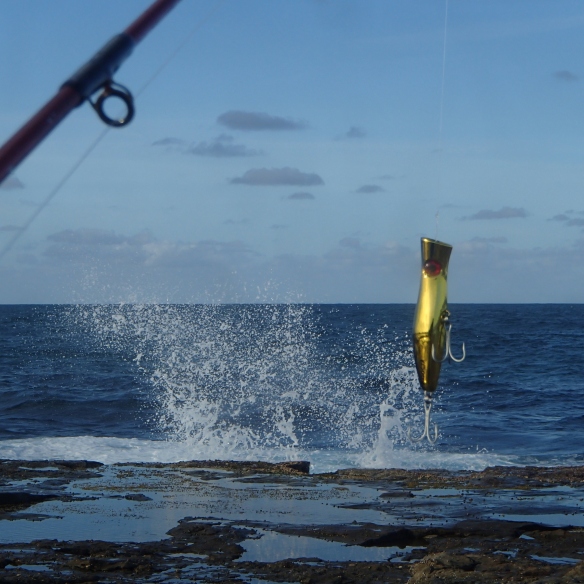 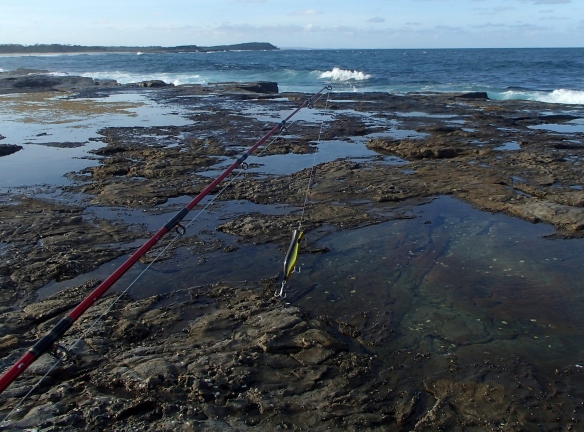 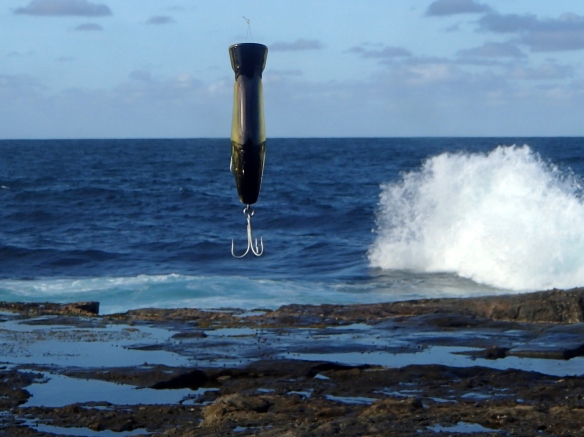 I started casting straight out of the front of the Bluff with the same Halco Roosta Popper. About four casts in….. whoosh, bang, a smash and grab, at just about the same spot as yesterday. I had the drag set much tighter this time but the fish was pulling hard. I never really managed to slow it. As it moved passed the extended rock ledges to my right I tried to go with it, but the line soon got caught in the cunjevoi and on the next big run it sawed through the braid.

I fished around with some soft plastics and a few smaller poppers but could not find the fish again. I determined that unless I was willing to use a much bigger rig I was not going to stop these fish. I retired just before dark.