Saturday would be my last morning in Iluka for a while. Despite praying for calmer weather the wind was forecast to pick up. I had a lie in as low tide would not be until 2.30 pm. I arrived at Shark Bay at about 10.30 am.

All week I had been expecting the stirred up seas to reveal a few Jewfish/ Mulloway. There was lots of bait around and previous trips, at this time of year have nearly always produced a few. The big seas had made it difficult to reach my favourite spots – perhaps the fish were there but I just could not get to them.

With this in mind I decided to start on the southern side of the Shark Bay rock platform. I would be casting straight in to the south-easterly wind so I needed to fish with something fairly heavy. There are lots of rocks on this side of the platform so I was not confident I would keep my lure.

I have a couple of Rapala 13g, 6cm Clackin Raps, lipless vibe lures which have been rattling around the bottom of the tackle bag for ages. I have never caught anything on these lures so I was not too worried about losing them. I rigged up the lighter of my rock fishing rods (the Daiwa Air Edge) and tied the lure on to my Aldi braid and 20lb fluorocarbon carbon leader. I cast the lure into the surf and waited for it to sink. The sea was very lively and I could only just feel the juddering vibrations as I yanked the lure along. After about three casts the lure pulled tight on something and I thought I had hit some kelp. I pulled the rod tip up and then line started peeling. I knew it was a Jewfish straight away. It made three long powerful steady runs and then started swimming back towards me. The game of cat and mouse continued for about 10 minutes. The rod was not powerful enough to force the issue, so I just had to be patient. After a couple more minutes the fish popped over on its side, a few meters from the shore. It looked as if it was beaten, so I tightened the drag a little and tried to pull it over the rocks with the next surge. Either the wave or sense of impending doom caused it to suddenly wake up and it put its head back down and tried to bury itself. The leader slipped down between the cunjevoi and I could not free it. I could see the fish and lure hanging on by just the single big hook on the front treble, a few metres in front of me, but could not get to it. Another big wave came over and when it receded the fish was gone and the lure was lodge firmly in the cunjevoi. They always getting bigger in your memory but I think it was about a 6kg fish. I realised I did not have my camera with me – perhaps that’s why I could not hold on to the fish. 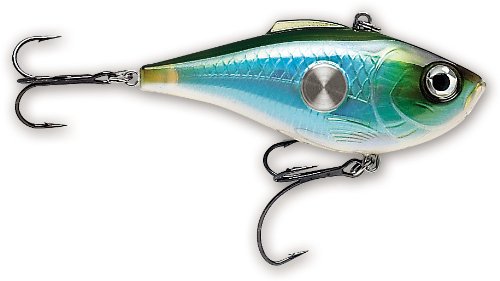 I had another, bigger Clackin Rap and I cast this around without success. As the tide lowered I moved to the front of the rock platform, also on the southern side. I swapped to a soft plastic on a ¼ ounce 2/0 jighead. I needed the weight to cast against the wind. I put on a GULP Jerkshad in the Peppered Prawn colour. I lost the first to the rocks and tied another one on. After a few casts this was slammed in the surf, close in. The fished pulled hard and when I finally subdued it, I was surprised to only see a small Trevally.

The challenge in this spot was losing gear to the rocks and I lost a few more rigs over the next hour or so. I swapped to a Gulp Jerkshad soft plastic in the Sweet and Sour Chicken colour and when I got this one in to a good foamy patch of water just beyond the rocks, I almost instantly hooked up. This time it was a 55cm tailor and I managed to pull it in.

I finished the session casting the long DUO Pressbait Saira hard body off the northern end of the rock platform. As it had done all week the lure found lots of long toms and a few more small tailor.

Just after low tide I stopped for the day. It had been another great week of fishing at Iluka.