Monday was to be my last day at Coffin Bay. The wind had come up again and when I woke at 5.30 am it was bitterly cold. I wrapped up and drove round to the flats at Farm Beach. In the biting wind I wandered around casting through dawn but apart from a few nibbles, I did not catch anything.

After sun up I drove back round to Mount Dutton Bay and fished in cold crystal clear water. The juvenile salmon were everywhere and they smashed in to just about every soft plastic that I cast at them. The GULP Lime Tiger Fry was particularly popular but I think they would have attacked anything. At about 10 am I gave up and went to thaw out.

In the afternoon I drove round to fish at Seal Rocks on the western side of the peninsula that surrounds Kellidie Bay. The rock ledge here faces west and the sunsets directly in front of it. The locals tell me they catch snapper, kingfish, whiting, gar, flathead, salmon and herring here. I started with a GULP Turtleback Worm in the Banana Prawn colour. I was using a 1/16th ounce 2 hook jighead and 8lb breaking strain fluorocarbon leader.

From the first cast the King George whiting attacked the soft plastics. I caught a few but they were all too small to keep – around 25 cm long. I swapped through a few different soft plastics and moved up and down the shoreline casting at any fishy looking spots. Every now and then, a small salmon would get to the soft plastic lure ahead of the whiting, but on many occasions the jighead would come up expertly cleaned, but with no fish on it. I fished through until the sun dropped behind the horizon and then gave up. 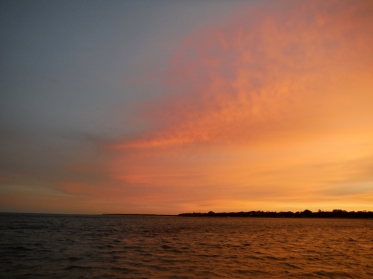 In summary – Coffin Bay had produced great salmon, herring and wrasse off the beaches, a few good sized King George Whiting from the shores of the bay and juvenile salmon trout just about everywhere. I will definitely be back.