I was back in Brisbane and for once jetlag was quite useful. I kept waking up early so on Sunday I decided to drive up to Bribie for a fish. I arrived at about 6.00 am, just after first light. The first thing that struck me was the enormous floating pontoon that has been attached to the end of the old oyster jetty. It is a pretty imposing structure. It was a couple of days after full moon and the water was still. There was virtually no wind.

I put on a GULP Jerkshad in the BBQ chicken colour. I was fishing with my LOX Yoshi 7’6” rod, Shimano Stella 2500, 10lb braid, and a 10lb fluorocarbon leader. The tide had been low at about 5.30 am and it was just turning in.

I cast around under the new pontoon and had one good bite but I could not set the hook. I moved under the jetty. The first fish of the day was sitting in the shallows just to the south of the jetty. It swiped at my lure on a slow retrieve but I did not hook. I cast back in the same spot 4 more times before it decided to bite again and this time I got it. It was a solid 55 cm flathead. 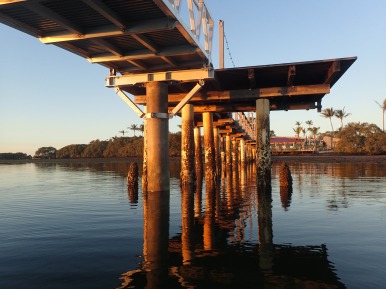 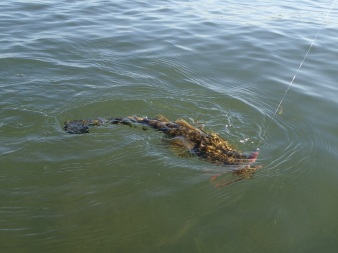 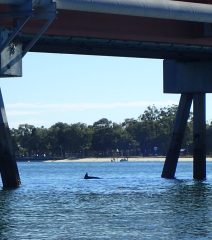 I continued south, fishing with the same lure. After about 30 minutes I caught another flathead, a little smaller than the first. I carried on to the south and caught one more flathead, in front of the big sandbank, which was about 45cm long.

By about 9.00 am the incoming tide was pushing me back from the edge of the weed beds, so I gave up for the day.