On Tuesday I drove back up to Bribie for another early morning fish before the forecast wind picked up. I arrived just after low tide and sunrise at about 6. 30 am. The moon was on the wane and about 70% full.

I had given up on the LOX Yoshi Rod for this type of fishing. It is fine on a windless day, but there are very few of these. I was finding my casts kept tangling around the end of the rod unless casting with the wind directly behind me. I swapped back to another bass rod – my G Loomis SJR6400 5’4” Mag Light/ Extra Fast. This is a short rod but still casts a loaded 1/8th ounce jighead a long way. Once you have a fish on it does not have a long enough tip to have the subtlety of the LOX, but it still soaks up the lunges.

This morning I had to cast for a while to find a flathead. In fact, I was fishing for more than an hour before I had my first bite. I was using a GULP 4 inch Minnow in the Pearl Watermelon colour on a 1/8th ounce, size 1/0 hook jighead.  I was standing well south of the jetty casting over the weed, aiming to land the soft plastic on the sandy patches beyond. As I hopped the soft plastic towards the weed edge, the fish grabbed it. It was a solid 50 cm flathead. 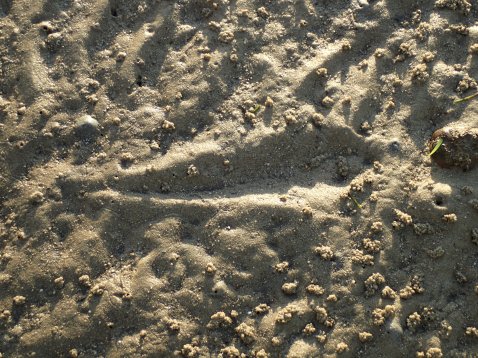 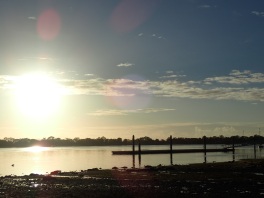 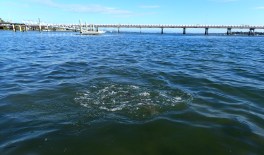 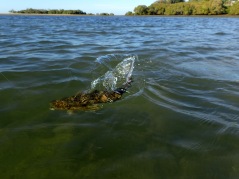 I cast around to see if there were more nearby but I could not find them. I carried on wading south as the tide rolled in. I swapped to a GULP Jerkshad in the BBQ Chicken colour. At the spot where the water first comes over the big sand bank I found another fish. It was a little larger than the first and had only taken ten more minutes to locate.

I thought things were looking up but it took 45 minutes to find another flathead and this one was quite a bit smaller at only just over 40cm. By about 9.30 am the incoming tide had forced me away from my favourite spots and the wind was really blowing, so I gave up for the morning.