In early May I had to visit New Caledonia for work reasons. I had never been before but had heard the fishing was amazing so I took along a rod, a few hard bodies and a few packets of GULP soft plastics. When travelling you are fairly limited in what you can bring so I chose my 6’6” 2- 4 kg Berkley Dropshot, two-piece rod with my trusty Shimano Stella 2500. This is not a very heavy-duty setup but it is a good all-rounder.

New Caledonia is a French territory in the Pacific. It is made up of one large and a number of smaller islands surrounded by fringing reefs. Between the outer reef and the shoreline, calm tidal lagoons hold plenty of fish amongst mini reefs, sandy bottom and sea grass beds. These lagoons can be huge but many are protected so you need to check where you can fish.

I was working near the town of Nepoui, half way up the main island on the west coast, for the first few days. On the instructions of the locals I took my rod down to the jetty after work, at about 4.00 pm. Their instructions were simple – cast anywhere off that jetty and you will hook up. It sounded too good to be true, but they were right. I put a GULP Jerkshad in the Cajun Chicken (Black & Purple colour) on a ¼ ounce jighead and cast it out on 30lb main line and 20lb leader. I let it sink down to what I thought was the bottom and then bounced it along for a couple of hops.  On about the fifth hop, the rod bent over and line started peeling. I immediately realised I had brought the wrong rod with me. The fish headed away from the jetty and I tightened the drag but it hardly slowed. It soon became apparent I needed to tighten the drag more or get spooled. I wound the drag down and the leader snapped. I upped my leader to 30 lb and tried again. This time I started with much more drag pressure. I cast about four or five more times in roughly the same area and then I hooked up again. The fish swam out to sea but this time after a long initial run I got some line back and settled in to about 10 minutes of back and forth until I saw a small (50 to 60 cm) giant trevally coming towards the surface. It was well hooked but I was never going to be able to pull it up the side of the jetty and as soon as I tried, the jighead hook bent and it swam away.

I decided to change position and fish at the edge of the jetty, on the mainland, from the rockwall. This way I would have a better chance of landing the fish when I hooked up. There were thick schools of bait around the jetty pylons and I cast at these and let my soft plastic flutter down in the current. After about ten minutes I was onto a fish again. It felt very fast as it too headed straight for the open sea. It took about 15 metres of line on the first run then leapt clear of the water – it was a small queenfish. With the light rod I could not really put any pressure on but I manage to exhaust it eventually and grab it at the base of the rocks. I took a couple of pics and speared it back in to the water.

For the next few days I was staying at the Sheraton Domaine De Deva Resort at Bourail. The lagoon and reef in front of the resort is a Unesco World Heritage site and fishing is not allowed but I followed a four-wheel drive track about 10 kms north of the resort to the Plage a Temrock, where fishing is allowed. At Temrock a deeper channel comes in close to the shore and the locals told me this was where the really big ‘carangue geante’ (giant trevally) hang out.

I arrived in the late afternoon as the tide was running out. I met a couple of local lads who were casting big poppers out into the channel. My French is poor but through broken English they explained they fished a lot here but rarely stopped the big ‘carangue’. They explained they fight too hard and there is too much coral for them to rub through a leader.  They were hoping to catch a mackerel which they like to eat and have more chance of stopping.

I moved back from the point and fished in slightly shallower water on the edge of the channel. I was casting in between big brain corals that were almost exposed by the falling tide. As the sun dropped I caught a small tea leaf trevally on a soft plastic shrimp and then another, this time it was a ‘big eye’. It was now dusk. I was retrieving the soft plastic fairly quickly and fishing with a lighter, 1/6th ounce, size 1/0 hook jighead and a Lime Tiger coloured Jerkshad soft plastic. On about my third cast with the new plastic, I watched as a huge bow wave came up behind it and a silver shape turned on top of it, swallowed and ran. The reel screamed briefly and then the leader snapped, either on the fish’s teeth or the coral. I gave up for the day.

The next morning, I was back with 30lb leader and my toughest jigheads. The tide was running out and from the first cast I caught fish. In fact, the fish were destroying the soft plastics if I let them settle for too long. I caught a raft of multicoloured reef fish; a Robinsons sea bream, a yellow tailed emperor, several brightly coloured species I could not name and then a few very thick and toothy barracuda.

As the tide receded I perched ankle deep in water on a coral bommy and started casting into a slightly deeper channel. The trevally soon turned up. It was now around midday but the bite did not slow. I was almost out of soft plastics so I swapped to a small hard bodied vibe lure. Almost as soon as this one hit the water it was slammed. I kept the drag tight and wound like mad, straight from the start. I lost the first one to the coral but I managed to turn the head of the second one and eventually, pull it to my feet. As I fiddled around in my fishing bag for some pliers to release it, a big eel poked its head up through a crack in the coral and grabbed its tail. I held the leader and pulled hard but the eel won the fight and I lost another lure.

I tied on another small vibe lure and started casting again. Things seemed to go a little quiet. Then I noticed a light grey shape swim slowly past the base of the bommy in front of me. It was a shark of some kind and was followed by two more. I assume the eel was eating the trevally in its lair below me and this had brought the sharks in. They were between two and three meters long and I was a little unsettled. The water beside the coral outcrop I was standing on was about waist deep and it was now about twenty metres to the shoreline. The sharks circled and then one smashed into something on the surface about 20 metres away. Then it all went quiet again. 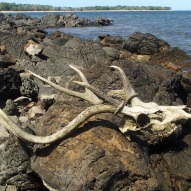 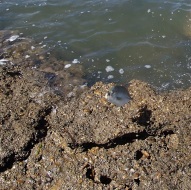 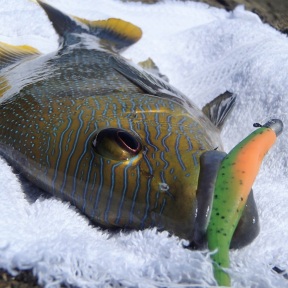 Despite the excitement, I had suddenly lost my desire to catch any more fish. I waited on the top of the coral for another 15 minutes, and then decided I would slip quietly into the water and wade calmly, quickly and quietly to the shore. I waited another ten minutes until I was certain they had moved on. I then jumped off the bommy and ran as fast as I ever have, splashing loudly, until I had two feet in dry sand.