A long weekend with my daughter, camping at Iluka, gave me the opportunity to put in a few fishing sessions on the rocks at Woody Head. I was limited to fishing when she got up, which meant no early starts, but fortunately, the low tides were mid-morning. The chilly morning weather and occasional showers also made staying in bed a little longer, an attractive option.

I wandered out by the boat ramp with my light rod at about 7.30am, thinking I might catch a Flathead or a few Bream on the receding tide. The wind was light from the south west. I rigged up with a 3” GULP Minnow in the Peppered Prawn colour on a ¼ oz 1/0 jighead tied on to a metre of 12lb Fluorocarbon leader and 10lb braid.

I was fishing along the line of partially submerged rocks that juts out from the shore just to the north of the boat launching area. I felt a couple of knocks and bumps that did not feel like the rocks and so concentrated my fire by casting in the same area for a few minutes. After about ten retrieves, a fish grabbed the lure, just at the edge of the rocks. It took off, jumping clean out of the water. It was an Australian Salmon and it carried on leaping for the next few minutes as I wrestled it to the shore. These fish really fight hard and they just never give up. Every time I got it near the rocks, it took off again and on the light rod it took a while to wear it out. Eventually I dragged it out of the water and took a few pictures. Although they look magnificent and fight hard, they taste dreadful. So I took a few pictures and then released it.

After a quick breakfast, I headed out to the rocks at the front of Woody Head, to the area known as ‘the Barnacles’. The weather was gloomy and rain was threatening but there was virtually no swell and a light south westerly wind. Low tide would be around 10.00 am. I was now using the heavy rod – the Daiwa 9 Ft Demon Blood, with a Shimano Stradic 6000 reel – loaded with 20lb braid and 30lb fluorocarbon leader. I loaded up with a GULP Crazy Legs Jerkshad in the Curried Chicken colour mounted on a 3/8 oz 3/0 jighead.

I cast out over the rock ledges and let the soft plastic sink for five seconds or so. As soon as I took up the slack, a fish hit the lure. A few more jerks and pauses and I was hooked up to something. After a quick tussle, I pulled the fish up, over the rocks on an incoming surge, grabbed the leader and landed it. It was a nice Trevally, around 50cm long. 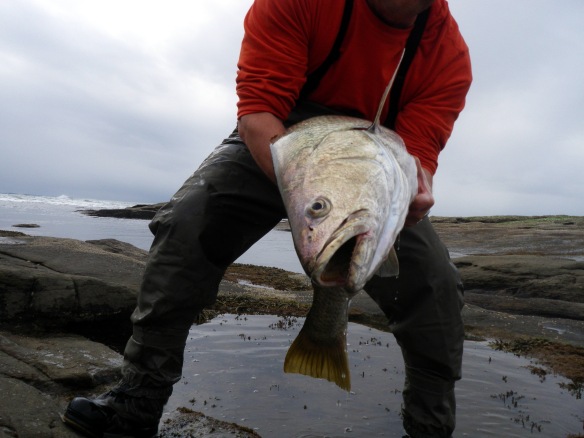 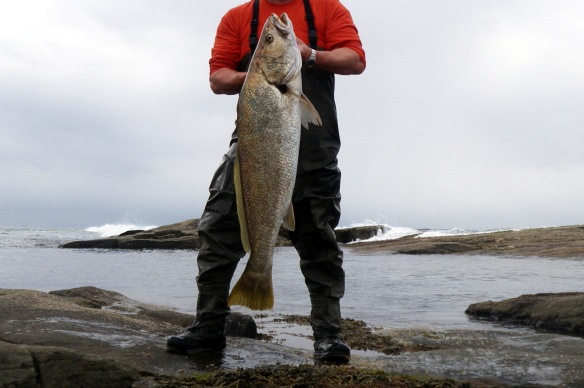 Caught off "the Barnacles" at Woody Head 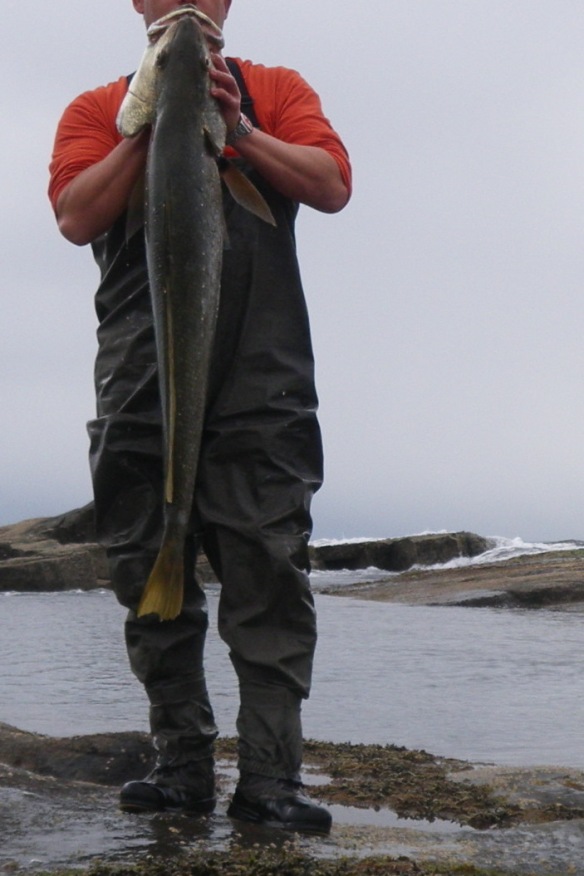 The next cast got snagged – so I broke the line and re-rigged with another GULP Crazylegs Jerkshad, this time in the New Penny colour, on a 3/8 oz 3/0 jighead. I cast out again and waited for the lure to sink, when I lifted the rod, I had a fish on the end. It made a long, steady initial run. The steadiness suggested it was a Jew. It swam up and down parallel with the shore a few times then tried to bury itself in the rocks. It seemed like it was stuck but I loosened off the drag and it swam out again. I gradually tightened the drag again and pulled it round to where I thought I could land it. After about 10 minutes it was pretty tired and with the aid of a big wave, I pulled it to my feet and grabbed the leader. It snapped, but I got my hand in behind the gills and pulled it across the rocks. It was a great Jewfish at 10.5 kg (gutted and gilled) and measured around 1.1 metres. It was my ‘personal best’ Jewfish and I was delighted.

At 10.30 am after just three casts I called it a day. I had a great fish and I was knackered but I had a very big smile on my face.