Saturday morning was dull, grey and cold. The wind was still from the south west and there had been some early showers. Low tide would be around 10.45 am. There was a light swell off the rocks in front of Woody Head.

I arrived about 9.00 am and I started with a GULP Crazylegs Jerkshad soft plastic in the Pink Shine colour. I had it rigged on 3/8 oz 3/0 jighead. On my first cast a fish grabbed it, just at the edge of the rock shelf. It ran up and down the ledge and then I lifted it over the edge, with the swell. It was a decent Trevally, around 55 cm long. I bled it and went back for more.

I cast out and a fish hit the lure as it sank – but there was no hook up. On the next cast as a fish grabbed it as I jigged it up off the bottom. After a few runs I calmed it down and lifted it over the rocks, with the swell. It was another Trevally – about 50cm long. I carried on for a while and caught a couple of Bream and a smaller Trevally, which I released. 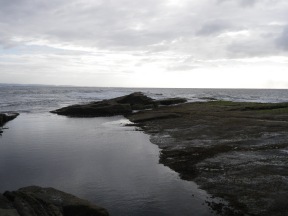 The rock known as “Barnacle Bob” at Woody Head