I arrived about 4.45 am, loaded up and walked out, onto the rocks to the usual fantastic view. The wind was a north westerly, as forecast. It was less than 10 knots when I arrived and stayed very light through the sunrise, as it often does. The horizon was bright orange by 5.10 am and there was plenty of light to rig up in. I had my usual heavy spinning rig; 9’6” Daiwa Demonblood rod, Shimano Stradic 8000 FJ reel, 30lb braid and 30lb fluorocarbon leader. The tide had just turned and was running in. It would be high just after 11.00 am.

There was to be no messing about with the poppers this morning – we needed a fish for dinner. I decided to stick with what had been working – the DUO Beachwalker MD 120 hard bodied, shallow diving minnow. I have lost a few of these recently and only have two more in the box, so I tied it on very carefully.

I moved round to the eastern edge of the platform and cast out towards the south east. The water was foamy but clear. The sun was not yet over the horizon. I put in about 30 casts with no result. I moved around the platform, casting in every direction. Finally, just as the sun was breaking the horizon, I was back where I started. I threw out another long cast. I retrieved it slowly, with 5 second pauses between jerks of the rod. About 3 metres out, I felt the solid tug of a fish and then line was peeling. After a few runs the fish jumped and I could see it was a Tailor, I brought it to the foot of the eastern side of the rocks and grabbed the leader. I had changed all my split rings for tougher models and there was no problem lifting the fish up the rocks. It was a fat 48cm Tailor – dinner was secure.

I carried on with the same lure for another hour with no luck. The dolphins arrived in a pod of 10 and did a bit of surfing but then just sat about 40 metres off the rocks – ready to intercept any unlucky fish that passed by. I saw another small school of Tailor swim by – perhaps 10 or 12 fish, but I was re rigging at the time so did not get near them. I tried slugs and big and small soft plastics but I could not get any more interest.

I decided to move a little further to the south side of the Fingal headland. The sun was now high in the sky and it was just after 9.00 am. The wind was now blowing about 20 knots from the north but this side of the headland was fairly sheltered. I swapped over to my Shimano Catana Coastline Light 3.2m 3-5kg rod to which I attach a Stradic 3000 reel. This is a great rod for casting lighter lures – particularly from the beach. The water was crystal clear and the swell was crashing against the barnacle covered rocks. With each surge I could see plenty of bait, close in to the rocky edge.

I decided to try one of my smaller DUO lures; the Spearhead Ryuki 45S. This is another perfectly crafted small sinking lure for bream, bass, trout, etc. It is ideally suited to Australian estuary fishing. It has quite a thick, solid shape and a very tight action. It weighs just 4.0g and is 45 mm long. Like all the DUO lures it casts very well. It is just about robust enough to throw around with the lighter Shimano Catana rod.

I cast it out parallel with the shoreline, counted to ten, to let it sink. The water was clear enough to see a steady procession of bait fish following behind it, on each retrieve. After about five minutes the line pulled tight and there was lunge. I had caught a small Bream – and yet another DUO lure had scored for Landangler. I caught two more using a similar technique but they were all around 25cm, so I let them go. I made a mental note to try the Spearhead Ryuki 45 out on the Flathead and moved further along the rocks. 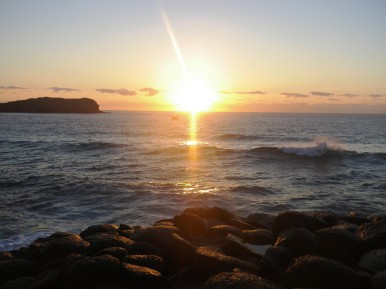 Another great start to the day 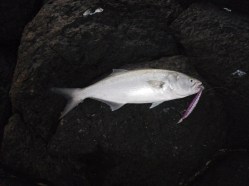 The trebles-rings were solid today 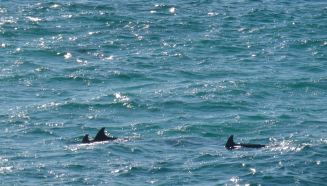 The Spearhead Ryuki tricks a Bream

3″ Minnow – no problem for this Dart

There was a big group of birds working about 800 metres off shore – they were very slowly moving towards me but they never got close enough to cast at. The Dolphins took up residence between me and the birds, just to make sure I had no chance.

I swapped to a small GULP soft plastic 3” Minnow and threw it around in the wash, on a 1/8th 1/0 jighead. I lost the tail after a few casts and put on another. A fish grabbed the new plastic almost as soon as it hit the water and took off. It was not big but it was fast. After a few pulls it settled down and I pulled a 35cm Dart out of the water.

By 11.00 am it was time to get the Tailor on ice, so I packed up. It had been an interesting morning and once more the DUO range had delivered. Northerly winds rarely leave me with a great fishing experience but this morning had been ok. It would appear that the real bite is only between about 5.00 am and 7.00 am, at the moment – so if you want to catch them, get used to no sleep!!