I promised to take a friend fishing and introduce him to soft plastics on Monday. Unfortunately the weather was far from perfect and we arrived at Bribie to find the wind blowing from the south-east at about 15 Knots.

I decided to start at White Patch, as it is sometimes just a little less exposed to the elements. I showed my mate the basic plastics rig and set him to work with a 3” Minnow in the Smelt colour. I started with the same.

Why is it always so bloody hard to catch a fish when you need to? I tried all the usual spots and swapped through a load of different soft plastics. I don’t think I managed to prove it was worth getting him up at 4.00 am by catching one small Pike in 3 hours.

The wind did drop off a little, so we moved down to Bongaree to fish around the Seaside Museum drain until low tide. This was a bit more exciting as after about 20 minutes there was a big swirl and splash in between us, as something slammed into the bait just in front of the drop off. This process was repeated every few minutes, as whatever it was moved up the edge, heading north. The angler a bit further north, thought it was a small group of Tuna – difficult to say, as I did not get a look.

Whilst it made interesting viewing I still had not caught anything and nor had my mate. I was about to give up when I felt the solid ‘thud’ of a Flathead. In the end he had grabbed the lure I had started the day with – the GULP 3” Minnow in the Smelt colour. It was a decent fish – approximately 50cm long and it was immediately donated to my patient, but cold, fishing guest. 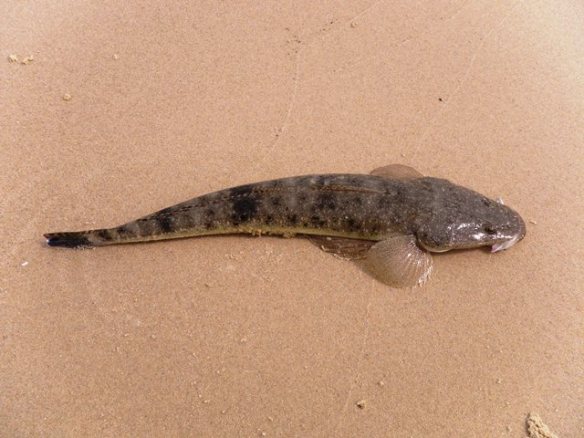 At about 10.30 am we gave up – I take my hat off to fishing guides everywhere – and will not be calling myself a ‘Gillie’ any time soon.