Flushed with success in the Jewfish department – I was up just before 4.00 am and marching out to the spinning ledge , imagining enormous Jewfish. New batteries in the headlamp made a big difference and the track was a little more familiar today.

The tide was running in and would be high at 10.15 am. There was a light north easterly breeze and virtually no swell. I arrived at about 4.45 am and rigged the heavy rod with a 30lb leader. I wanted a bit more light before going further round the head to try the Jewfish spot – casting and climbing around that rocky area, in the dark, was a recipe for disaster.

So in the half light, I decided to cast a DUO hard body minnow – the Beachwalker MD 120 which has been catching a few Tailor for me, lately. I love this lure it has great action and swims just about 30cm below the surface for most of the retrieve. I was casting to the north from the spinning ledge. I started with a slow retrieve; this did not attract any interest so, after ten casts, I started to retrieve the lure much faster, with pauses and twitches, all the way in. I felt a hit, but did not hook up. I cast straight back out and this time the fish hit it. It was just a small Trevally and I soon had it at my feet. I quickly threw it back and cast out again. I got another couple of knocks and one hard strike, but could not hook up. Then the fish moved on or wised up – either way, they stopped attacking the lure.

It was now light enough to move further round, nearer to the tip of the headland and try for another Jewfish. The swell was lighter today, so there was less foamy water and the tide was a little lower. I rigged up with the same GULP Crazylegs Jerkshad in the Black Shad colour, that had caught fish the day before. I stuck with a 3/8th oz 2/0 hook, jighead but dropped back to a 20lb fluorocarbon leader, as conditions were a little less rough.

I fully expected to hook up instantly, but the fishing gods had sprung their cunning trap and absolutely nothing happened. I tried every colour and shape of soft plastic, lightened the leader and threw a few hard bodies, fruitlessly, into the rocks – where they remained. I fished for almost an hour before I figured out they definitely were not there or, more likely, were not eating.

I walked back to my cabin at about 9.30 am to strategize for the afternoon session and have breakfast/ lunch. I spent the afternoon exploring the ledges around the headland before Connors beach, to the south of Hat Head. There are plenty of spots to fish here, but it would be a serious struggle to land a big fish on any of these ledges.

At about 4.00pm I set off again to fish the same spot at dusk. This fishing lark keeps you fit (if it does not kill you). The trip out to the Spinning Ledge is about 5km return – do it twice a day and you sleep well! I arrived at about 4.45pm and cast around on the Spinning Ledge with a GULP Jerkshad with no result.

As the sun dropped behind me, I moved back round towards the Death Hole. There was a stronger northerly wind blowing now and there was a little more swell. The tide was in the first half of the run in. As I had no luck in the morning, I had decided to fish lighter at dusk, with my new Shimano Catana Coastline Light. This is a 10’ 6” rod, rated 3-5kg. I use it with my Shimano Stella 2500 spooled with 8lb Fireline Exceed. I tied on 16lb fluorocarbon leader and a 1/6th oz, 1/0 jighead.

I put on various coloured 5” GULP Jerkshads and cast around without success for about 20 mins. Then at about 5.35 pm, just as the sun had dropped behind the headland I felt a very solid bite. The fish was a good size and the lighter rod was no match for it. It soon had the line snapped. I re-rigged with the same set up. First cast and I had another fish on. This one was more manageable and I was able to play it out and slowly swing it over the rocks onto a ledge below and then pull it up by the leader. It was a school Jewfish – just under 50cm. It had what looked like a tag in its back. I was only going to carry one fish back over the rocks tonight and I was confident I could do better, so I let it go.

Dawn – but no fish 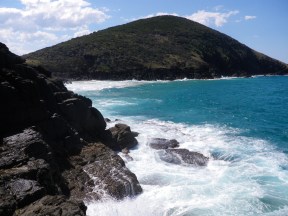 Lower light was the trigger for them to start eating

The first one was only just over 45cm – and tagged

I presume this is a tag

Decided to keep this one 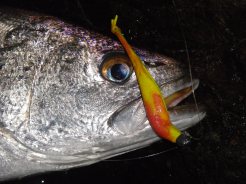 The best fish of the day – 70 cm Mulloway

The fish fired up just as the sun dropped

I was now fishing with a GULP 5” Jerkshad in the curry chicken colour (red and yellow). I was still using the 1/6th 1/0 jighead. I had another bite and run, but no hook up. Then, about 15 minutes after landing the first fish, I had another solid fish on. I let this one have its head but tightened the drag enough to keep it away from the rock overhangs. I let it run off steam and watched the swell. When things looked calm I moved down closer to the water, tightened the drag and pulled the fish round the rocks to a point where I could grab the leader. The leader broke almost as soon as it took the full weight of the fish, but fortunately it fell between two rocks and I could reach down and get it. This was a nice fish about 70cm long.

It was now getting dark so I quickly gutted it and then packed up. I carefully climbed back round to the track and carried my gear and the fish back to the cabin. Dawn and dusk had produced the only fish today. I was surprised at how cold the water is and I was also surprised that I had not found any Bream on the lighter set up. Apart from a few Whitebait, where I caught the Jewfish, I saw virtually no bait, the whole day. After a quick bite and clean up I was in bed at 7.30pm!