Hat Head was turning into a Jewfish expedition. Apart from a single Trevally, I had caught only Jewfish. On Thursday, I was determined to explore some different spots around the headland and hopefully, catch some different species. There was distinct lake of bait around and the water was very cold, perhaps this was making it hard to catch anything else.

I started at the Jewfish spot (could not resist), at dawn. This produced nothing but I did watch a small pod of Tuna swim by just after dawn – of course, they stayed well out of casting distance. By 7.00 am I had not had a bite. The wind was a light northerly so I decided to take the track over to the other side of Hat Head and have a look at the ledges around ‘the Island’.

The Island is on the eastern side of the headland and is reached down a steep path. It’s logical to fish this side during strong northerly winds, as it is sheltered. You can walk across a sand spit to reach the Island at low tide but by the time I arrived it was the second half of the run in tide and I could not get out to it.

There are rock ledges, channels and drains all around. They looked like they would all hold fish but, try as I might, I could not get a bite. Admittedly, it was neither dawn nor dusk but I was really surprised that there was nothing around.

I carried on to the rock ledges around Connors Beach and fished the one known as ‘No.1’. This also looked very promising but produced nothing. After wandering around all day, I had nothing so I marched back to the Jewfish spot, in time for dusk.

I arrived about 5.00 pm. I had the heavy rod this time and was fishing with a GULP 4” Pearl Watermelon Minnow on a ¼ oz 2/0 jighead. I was using 20lb fluorocarbon leader. I fished for half an hour with no result and then, right on 5.30 pm, I felt a solid bite. I paused and then struck and there was a fish on the line. I played it out and pulled it round to the easier landing point, at my feet and gently pulled it up the rocks. It was another keeper sized Jewfish – about 60 cm long. There was enough in the fridge, so I released it. I fully expected a few more, but that was it, all over. I fished on for 45 minutes, until it was completely dark and tried a range of soft plastics without another hit.

Its a long steep walk down to ‘the Island’ 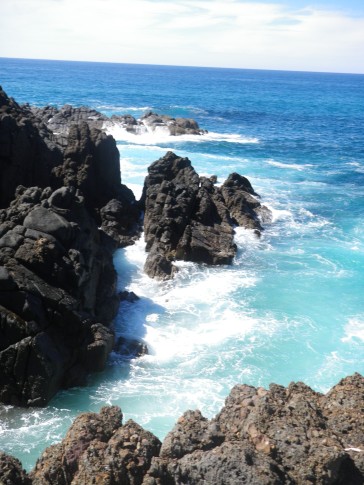 Just north of ‘the Island’

There is so much fishy water all round ‘the Island’

Looking back at Smokey Beach 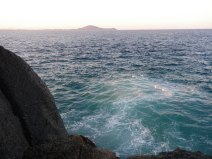 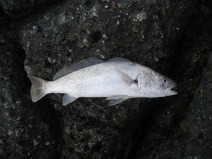 A long day of fishing – but persistence paid off

I had wandered around fishing from dawn to dusk for only one fish. It appears I could have rested my weary legs and just fished half an hour at dusk, to achieve the same result. But that is how fishing works, you put in the hours of exploring so that next time, you will have more idea of where to fish and when to fish.

I fell into bed after a shower, a few Jewfish fillets and a mug of red wine. Only one fish but that is all you need sometimes.