Christmas has left me feeling knackered – all that eating and drinking wears you out. As many of you will have realised Landangler is almost a nocturnal creature at this time of year. I am not a good sleeper at the best of times but the full moon seems to really wind me up. So I went to bed early on Thursday night but tossed and turned and it only felt like I had just got off to sleep when I realised it was already light outside. I really did not feel like getting out of bed but I looked out of the window and saw a clear, still sky. The forecast big winds were not blowing so I decided I’d better get going.

I decided to put in the hours at Skirmish Point again. I would be fishing the incoming tide. High tide would be 2.4m at 9.32am. I walked along the beach from Woorim and arrived at Skirmish just after 6.00am. The sun was bright and the water was comparatively still. I stuck with the Catana Coastline Light rod but decided to try a lighter leader and 1/16thoz jighead, for the calmer conditions. I put on a GULP 3” Minnow in the Peppered Prawn colour. I immediately felt a few hits and there were a few bait sprays as something attacked the small bait fish that were sitting on the wave break.

I could see tiny mullet all around in the clear water. It looked like small tailor were feeding on them. I kept up a fairly quick retrieve with the soft plastics, to avoid dragging up the glass weed that was all over the bottom. Almost every cast I would feel a bite or a bump, but I could not hook up. The fish kept snapping at the tails right up to the beach, where they would let go and swim away. After about 15 minutes of this, I hooked one and landed it – a 15cm tailor.

It was now about 6.30 am and over the next three hours of run in tide I walked up and down this area of beach, casting all sorts of 2”, 3”, 4” soft plastics and small hard bodied lures. The water was clear enough to see the schools of tiny mullet follow the lures in. I caught five more tailor – the largest of which was just about 25cm. I tried brighter colours – the GULP 3” Minnow in the lime tiger colour. Something bigger hit this and took off. It felt big but everything is relative – it was only a 25cm Dart, but things were looking up. 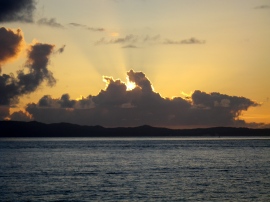 The sun took a while to appear at Skirmish 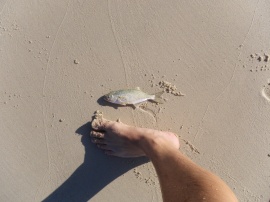 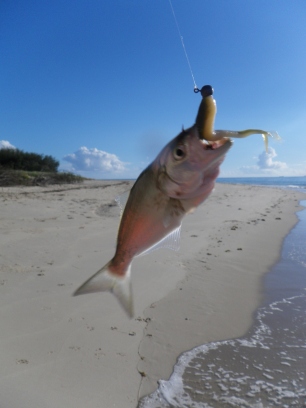 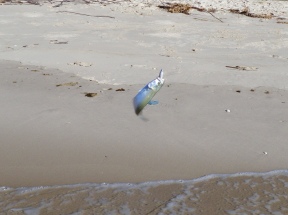 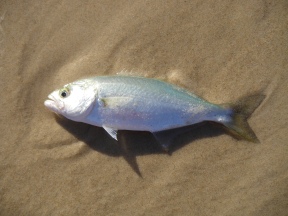 Best of the day

This was about the biggest tailor I could find

Unfortunately as the sun got higher in the sky even the small fish decided to slow down. I caught a tiny Whiting at about 8.00 am and then it all went quiet. It had been a better morning and at least I had caught a few fish – just enough to keep me coming back!