It rained hard over night and I actually woke up cold on Tuesday morning. I made a huge mug of tea and fished out a long sleeve t-shirt. It was just after 5.00 am. The wind had already moved round from the south-west to blow from the east, but it was still fairly light. Low tide had been at 4.13 am. The swell might have eased a little overnight so I decided to start on the rock platform, out front at Woody Head. I walked out to the ‘Barnacles’ in the pre-dawn and things looked promising. There was only the occasional wave coming over the top and I would have an hour or so to fish before the tide got too high. It looked like it would even be possible to put out a few casts in front of ‘Barnacle Bob’.

The day before I had noticed the 20lb Fireline had started to fray on the heavy rod and I had lost a fair amount of the 10lb Platil Millenium braid, on the light rod. The Platil braid was getting a bit water-logged and heavy and not casting well. I decided neither was working particularly well in these conditions, so I drove into Big River Bait and Tackle at Maclean and asked for some suggestions on re-spooling. They were all a bit fed up after the floods. The Clarence River was still black and smelly and logically the fish looked like they had all fled out to sea for a while. The Clarence is a huge system and it will be a couple of weeks before the river improves.

As usual, the team gave me some good advice and suggested I re-spool both with 20lb Super PE braid. This would be thin enough to cast well on the light rig, but robust enough to handle a decent fish on the heavy rig. Best of all, they stripped off the old line and re-spooled both reels while I went off for a Pot Belly Pie (a local speciality) and a coffee.

So back at Woody Head the next morning I was fishing with perfectly loaded reels. This makes a huge difference when casting in difficult conditions. Every line change takes a little getting used too but the Sunline Super PE was a massive improvement. I started with the heavy rod and a GULP Jerkshad in the Lime Tiger colour on a ¼ oz, 3/0 jighead. I moved out carefully over the rocks to a spot just in front of ‘Barnacle Bob’. This has been the scene of a couple of big fish captures for me and whenever it’s safe I try a few casts here. I put the lure exactly where I wanted it but after five or six casts I had not found anything. I swapped through a few more soft plastic colours, but these did not produce any interest.

I moved south along the front of rocks to a safer spot and swapped down to the lighter rod. I put on a 1/6th oz, 2/0 jighead and tied on a 12lb fluorocarbon leader. I decided to try a different soft plastic lure. I have never been a fan of the pure white lures, I have always assumed they are an offshore, deep water idea. But I had a packet of GULP jerkshads in white and I was not having much luck, so I decided to give them a try.

It was a wise choice; I cast out wide and let the lure waft in on the swell. I left it as long as I could and it got snagged. I re-rigged with the same set up. This time, right at the base of the rocks, I felt a bite, dropped the rod down and then struck. I had a fish. I let the swell wash it up. It was a nice Bream, well over 30 cm long.

I cast out again and felt another bite, but did not hook up. I carried on for a few more casts, using exactly the same technique. About five minutes later at 6.15 am I felt a gentle tug and then a solid bite. A wave came crashing over the top and I thought the fish was gone but as the water drained, the line was still tight. On the next swell I tightened the drag a little and pulled hard. A school Jewfish came into view. It had a bit of fight left in it and I only had a 12lb leader so I let it swim back out again. The next wave was a big one and it washed the fish over the rocks and back, past me into the drain behind me. I waited for the water to drain away again and when it did the fish was stranded and I grabbed it.

Sunrise at the Barnacles – Woody Head 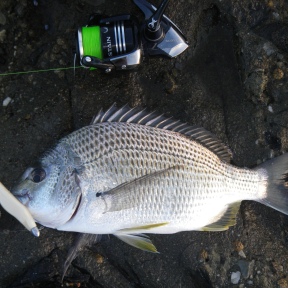 My first fish on a white GULP jerkshad – a 34cm bream

The bream was followed by a small school jewfish-mulloway

It was the first school jewfish of the week and it had been lurking right at the base of the rocks waiting for dinner. It was no monster at about 50cm long (NSW size limit is 45cm) but it would make a good meal. I despatched it and put it in a keeper rock pool. I looked for more and fished for another two hours but could not find any. I lost plenty of gear trying to get my lures into the strike zone but as the tide rose and the wind picked up, it became harder and harder. At about 8.45 am the water was sloshing over the rocks with every surge and I had to retreat.

I went back to wash clean up the jewfish. I gutted it and had a look in the stomach. It was full of the tiny whitebait I had seen jumping by the rocks. As I was doing this I was standing in the shallow rock pool. After a few minutes of cleaning and scaling, I nearly jumped out of my skin as I heard a loud snap and splash, just behind my heal.

I found a big hungry wobbegong already in attendance. It had swum up a series of very shallow rapids to reach the pool, just below where I had lay the jewfish. The blood and guts had attracted him. I hopped out of the water and quickly found another (stranded) patch of water to finish the cleaning. By the time I finished cleaning the bream there were four of them swimming around, like toothy puppies waiting for lunch.

I had cut off the bream’s head as I intended to pan fry it on my camp stove. I left it on the edge of the rock pool and was amazed as two of the wobbegongs wriggled out of the water, in their attempts to reach it. Eventually the bigger of the two lunged forward and inhaled the head, with a loud snap. 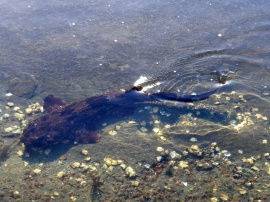 The wobbegong arrived after 2 minutes 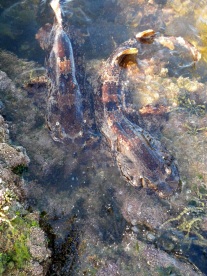 Wobbegongs wriggling clear of the water in search of my fish

The strike – the moment the wobbegong swallowed the Bream head

In the afternoon I came back to the same spot as soon as the tide would allow, at about 2.30 pm. I fished all through the afternoon but the swell and wash made it difficult again. I caught one good Bream, about 33 cm and dropped a bigger one, both on a smaller GULP 3” Minnow in the Banana Prawn colour, on a 1/6th, 1/0 jighead, around 3.00pm. There was plenty of bait, jumping, in close to the rocks but I just could keep the lure where I wanted it.

By 5.00 pm I was soaked through and decided to give up and head for the wood fire, fried bream and a bottle of red.