Midweek, the rain was easing off, but we have had so much that the estuaries and Moreton Bay are a muddy mess. Thursday morning looked like it might be worth a fish.

Full moon had passed on Tuesday and I expect the jewfish would be cruising around in the dirty water. Unfortunately, it would be a low tide around dawn. This would mean the water would be at its dirtiest at the optimum fishing time.

I decided to return to where I had caught fish last week – the flats around the old oyster jetty, just south of the Bribie Island bridge, on the mainland side of the Pumicestone Passage. I know I fish here a lot but it has been one of the most consistent fish producing spots for me over the years.

As I left Brisbane just after 4.00 am, it was drizzling. Then as I got on to the highway it really started chucking it down. Fortunately it was just a passing shower and I arrived at Bribie at about 5.00 am, just after low tide. I rigged up, pulled on the waders and wandered out under the bridge, in the dark.

The tide was a low low – about 0.4 m, because of the moon phase. The water’s edge was a long way from the mangroves. It was cloudy but the black sky was just beginning to turn grey in an attempt to signal dawn. The water was like milky tea in the shallows, but there was a bit of bait jumping around and the occasional prawn skittering across the surface.

When the water is as dirty as this I have no idea which colour soft plastic to go with. A hard bodied lure with a rattle or vibe would probably be best, but this area is very rocky, so that would have to wait. I decided to try a GULP jerkshad in the white colour on a 1/8 th oz, 1/0 jighead. It was tied on with 10 lb fluorocarbon leader.

On the first cast I felt a bump and saw a bit of movement behind the lure, in the water. I cast back in the same location and on the first hop, I had a fish. I could not figure out what it was. It was quite heavy and slow but made a few quite powerful quick runs – maybe it was a soapie jewfish or a ray. There are a number of oyster covered boulders in this spot so I took my time. It tired pretty quickly and I dragged it safely on to the mud. I was fairly surprised to see a stonker Luderick at my feet.

As most fisho’s will know Luderick are a largely vegetarian fish who prefer to eat green string and other weeds. They will also sometimes take live yabbies. They have tiny mouths and are usually targeted using weed, tiny hooks and very light leaders, under floats. This one was very hungry or perhaps, very confused by all the rain. It was a good fish and it later weighed in at a little over 1.5 kg.

I cast around this area in the shallows with a variety of soft plastics – big and small. I felt a few more touches as the sun poked over the horizon, but I did not hook up. I waded further south, casting as I went. There were more attacks, probably from the small moses perch or bream that hang around here. I passed under the jetty as the tide started to run in.

The hardest thing about wading in such dirty water is that you cannot see any contours on the bottom. I am always looking for the edge of weed beds or the small humps and channels that are dotted around this area. In these conditions you are just casting at where you think they are. Sometimes the surface movement of the water will help you but really, you just have to keep prospecting with long casts and slow retrieves. 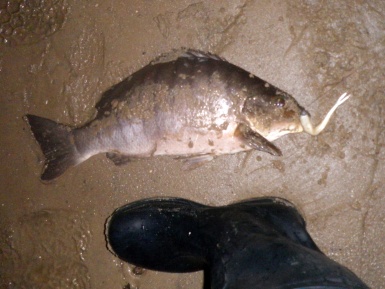 1.5kg Luderick under the Bribie Bridge

The sun almost got through 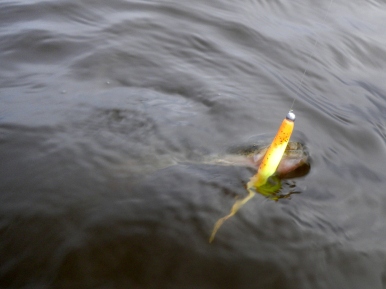 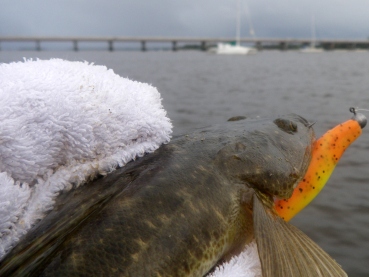 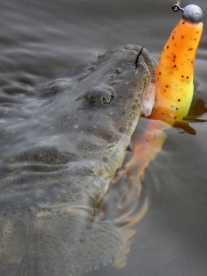 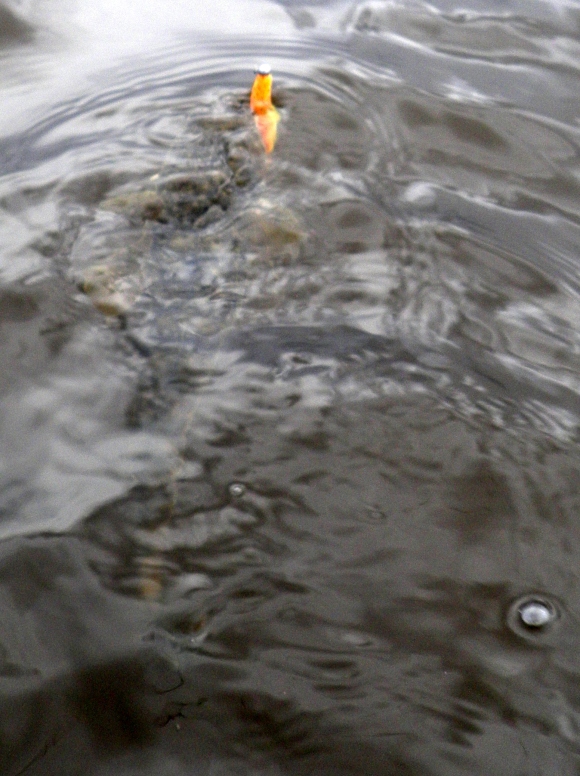 Surged up for a GULP jerkshad in orange tiger

The tide was now running in strongly but there was not much debris or weed floating by. I swapped to my DUO Ryuki Spearhead 45s. It’s a small sinking hard body that has been catching plenty of fish for me lately. I particularly like this gold/ green coloured one. It is looking a bit battered as it is rapidly becoming my favourite – that usually means its days are numbered! I was now casting over the sea grass so I had to keep the lure moving. I could only pause momentarily, to allow the fish to strike, every few seconds. The lure kept catching clumps of sea-grass on the bottom, but that just proved I was at the right depth – just off the bottom. At about 6.45 am the skies had clouded over again and it looked like it would rain yet again. I persisted with the hard body and thought I had a few knocks. I was about to swap back to a soft plastic when I felt some resistance and saw a splash. I lifted the rod tip and the lure caught in the mouth of a small flathead – just under 40 cm long.

I released the fish and decided to swap back to a soft plastic lure. I tied on a GULP jerkshad in the orange tiger colour. A paddle tail soft plastic might have been better in these conditions but I did not have one with me. I continued south, wading against the incoming tide, towards the green channel marker. I was soaked by another shower. The water was running in fast but it was no cleaner. I was casting towards the middle of the Passage and bouncing the soft plastic along the bottom until I felt it hit the edge of the weed beds. At about 7.10 am I felt a fish snatch the plastic and take off on a short run before dropping it. I stayed put and spent the next five minutes peppering the same area with casts. As I paused on one of the retrieves I felt a small hit, then a proper bite. I dropped the rod tip, then struck. It was another flathead. When it emerged from the cloudy water I could see it was only about 35cm long.

I was wet through and there was clearly more rain on the way. I trudged back to the car, dreaming of crystal clear waters and sunny skies. If you are prepared to get wet and fish blind there are things to catch – but it is not much fun at the moment.