The rain is easing but it is just being replaced by howling south-easterly winds. The only real option would be to fish the couple of hours either side of dawn, in a fairly sheltered location. So it was off to Bribie again, to fish the area under the bridge, on the mainland side of the Pumicestone Passage, as the tide fell.

I arrived at about 4-45 am to find I was not the only mad angler wetting a line. A couple of fishos were on the bridge casting to the north – a few pylons out. A couple of good jewfish have been landed from the middle of the bridge, at night, recently. The favoured technique is to fish with very heavy gear then drop a grappling hook down once the fish is worn out. This strikes me as a pretty tough proposition – but it does work.

I rigged up and waded along the edge of the mangroves, to the south of the bridge. The wind was from the south east and was blowing around 15 knots. The water was dirty and running out, against the wind. High tide had been at about 3.00 am.

I started by fishing with a GULP Jerkshad in the Orange Tiger colour, on a 1/8th oz, 2/0 jighead. There was a bit of surface action on the edge of the pools of light, cast by the bridge lights. Every so often, I could trace the path of a cruising predator by the scattering bait fish. There were some pretty big surges and splashes which made me reluctant to wade out further.

I had no luck with the brightly coloured Jerkshad, so I made a counter-intuitive switch to a 3” GULP Shrimp soft plastic in the Banana Prawn colour. This is a gold colour that would not really stand out at all in the sediment rich, murky water. After about ten minutes of casting without result, I switched my attention to the deeper water, just out of reach of the bridge lights. I carried on peppering the area and was about to swap soft plastics again when I felt a solid bite and a few moments later, I set the hook on a good fish. As I pulled it in between the mangroves, bait went flying everywhere. There is plenty of food around. It was a good flathead, about 55cm long and I kept it for dinner. It was 5.10 am and its possible that the sun was trying brighten the sky but the clouds were too thick.

The first and biggest fish of the day 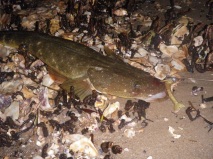 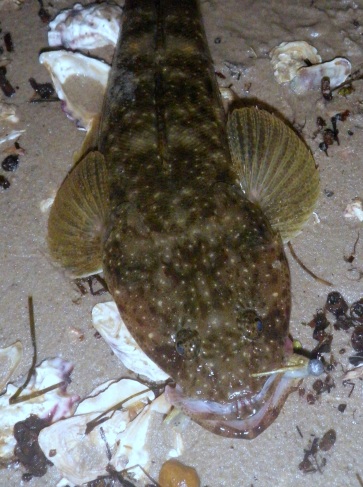 The second flathead was also a keeper

The Smelt minnow also got the last flathead

A good place to shelter

The sun nearly came out 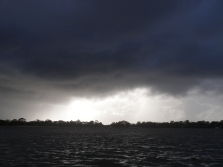 But the wind kept blowing in the rain clouds

The heavens opened and I retired under the bridge. The fishos on the bridge had disappeared – probably washed away by the relentless rain. I started casting to the north and gradually moved along between the pylons. It was now a little lighter and the rain had stopped. The water was getting dirtier as the tide ran out. As I cast out, around the base of the third bridge pylon, I felt a good bite, but did not connect. I cast back in exactly the same spot and got hit again, still no hook up. I cast another ten times in the same spot gradually slowing the retrieve right down and increasing the length of my pauses. On the eleventh cast I felt the solid bite of a committed fish. I dropped the rod tip and slowly counted to ten. After what seemed like an eternity, I lifted it and felt the lure lodge in the mouth of the fish. The rod bent over, I felt the resistance and the tip started wobbling. I waded back to the shoreline and safely landed my second flathead. It was a little smaller than the first, just under 50 cm. It was 5.23 am. I also kept this one for dinner.

I swapped to a 4” GULP Minnow soft plastic in the Smelt colour. I concentrated in the same area, around the third pylon. At 5.34 am I caught another flathead, almost exactly the same size. Three fish is about right to feed my mob for dinner.

It was now light but the sun could not break out above the clouds and the rain showers just kept coming. I persisted in the same area but things seemed to go a bit quiet, as the traffic on the bridge built up and the water receded. I swapped down to 3” GULP Minnow in the Smelt colour and moved a bit further out, to the south of the bridge. I felt a couple of taps and then hooked a small Bream. It was now just after 6.00 am. A few casts later the same plastic produced flathead number four. The smallest of the morning, but it was still a healthy fish, at 47cm.

I waded south, past the oyster jetty and on to the windy flats. The sun almost emerged above the clouds but the now howling south-easterly immediately blew some more rain clouds in, to block it out. One of these gave me a thorough soaking and despite casting around for more than an hour, I did not get a bite out here.

Just before 8.00 am another nasty black cloud opened above me and I decided to call it quits. It had been a successful morning but the wild weather had made it a challenge.