A friendly tackle supplier is fed up with reading about my exploits with the very capable Shimano Catana and decided to give me an alternative rod to try out. It arrived on Saturday – a N.S Black Hole Cabin II – S-862 L Spin Rod. It is 2.59m long (8’6”) and rated 8-14 lb. It will throw up to a 30g lure or ½ oz jighead, for a soft plastic. It is designed for throwing small lures in the surf or off the rocks. NS Black Hole rods are made in Korea and have forged a strong reputation for durability, mainly in the US. It seemed like a good idea to put it to work. So on Sunday I decided to head for Agnes Water and 1770 for a few days.

I arrived in the late afternoon and went straight down to the beach opposite the 1770 Getaway resort, where I like to stay – http://www.1770getaway.com.au . They have great stand-alone cottages and an on-site restaurant / coffee shop which produces a magnificent lamb spit roast, twice a week. The best thing about the resort is that Michael, the owner, is a mad keen fisherman. He has good information on where to fish when the wind is blowing from almost any direction. He is always very willing to share his knowledge, just sit him down over a coffee and pick his brains.
I had matched the new N.S Black Hole Cabin II with my Shimano Sustain 4000 reel. I had it loaded with 15lb Super PE braid and decided on a 16lb fluorocarbon leader, to start with. The beach is about a 10 minute walk from the resort and has a number of rocky out crops. It is just round the corner from Workman’s Beach, which is a little more sheltered, if there is a strong south-easterly blowing.

It was about 3.30 pm by the time I was ready to fish. The water was pretty stirred up and the swell was building. The wind was on shore at about 10 to 15 knots and it was bright and sunny. High tide would be at about 5.45 pm and the moon was about three days off new. I walked out on to one of the rocky out crops and loaded up with a Powerbait 4” Ripple Shad on the gold and black colour on a ¼ 2/0 jighead. I fished the lure along the edges of the rocks but after about 15 minutes, I had not had a bite. I decided to change to a heavier 3/8th 2/0 jighead, to make sure my lure was on the bottom. I also swapped soft plastics to a 5” GULP Crazylegs Jerkshad in the New Penny colour.

I fished around the rocks for another 20 minutes or so and felt a few bumps. The swell was up, I had a new rod and I did not know the terrain, so it was hard to tell if I was bumping into fish or the bottom.

Just before 4.00 pm, I lifted the lure from the bottom and felt a bit of resistance. I dropped it back down for a few moments, then struck. The rod tip started to wiggle and bent over. The new rod behaved well and soaked up the lunges and the Shimano Sustain drag took care of the hard initial runs. The tricky bit was the swell and the rocks – 16lb leader will withstand a Jewfish mouth for a while but it won’t last long if it rubs against the barnacles.

Fortunately the swell was pushing the fish in and there was a nice ledge at water level. I took my time and left the drag alone. The swell pushed the fish on to the ledge and I jumped down and grabbed it. 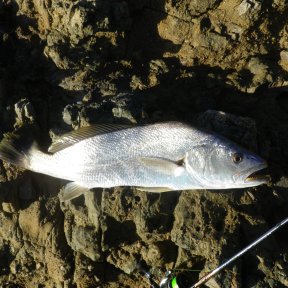 A fish in great condition 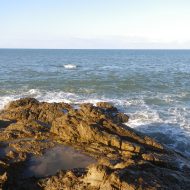 Scene of the capture 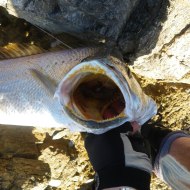 They can eat big baits 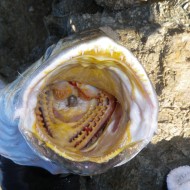 This one was surgically extracted 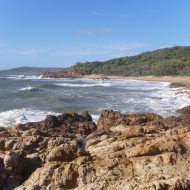 It was a great looking Jewfish – 77cm long and in fantastic condition. It had completely swallowed the jighead, which was now very obviously lodged in its throat. It had little chance of survival, so I decided to keep it and share it with my hosts at the 1770 Getaway resort.

I continued fishing until dusk but did not find any more. It had been a great opening session and I had successfully christened the new rod which had performed well.