Another fishing opportunity – and another miserable weather forecast, cold wet and windy. You just have to get on with it. I could not start early but I was able to reach the Bribie Island Bridge just as the tide was starting to really run in, at about 9.00 am. Low tide had passed at about 7.45am. There was a thick grey band on the horizon and a cool south-westerly breeze.

I wandered out past the jetty, heading south to my usual stomping ground. As I did so, the wind dropped and the drizzle started. I only had about an hour before the incoming tide would push me back, away from the weed banks.

A few weeks ago there were some good mullet schools in this area, but they seem to have moved on. I waded quickly south, to one of the more productive spots, along a big weed-covered sandbank. There are nearly always fish of some kind here. I started with a GULP Jerkshad in the Orange Tiger colour – bright orange and yellow with a black fleck. I was fishing with 8lb leader and a 1/8th ounce, 1/0 jighead. The water was still and fairly clear despite the wild weather so I was trying a high contrast soft plastic.

It did not take long. After a few casts, I felt a very slight grab. It could have been weed, but it felt a bit more solid. I dropped another cast in the same spot……….. nothing, except a clump of weed. I gave it one more try and bang, a flathead grabbed it and took off. The rod bent over and line peeled smoothly off the spool. The drag on the Shimano Stella 2500 had been expertly fixed by Neil at Jones Tackle – http://jonestackle.com.au/. It just required the adjustment of a small spring.

It was not a huge fish – about 50 cm, but it had plenty of fight in it. By the time it drew level with me, I could see it had completely swallowed the soft plastic. I pulled it over snipped the leader and slipped it into the keeper bag.

I re-rigged with the same plastic and peppered the area with casts. I did find another flathead so I moved about five metres further south. I put in a long cast and almost as soon as the soft plastic splashed through the surface of the water, there was a tug and then the line went slack. I wound it in to find the soft plastic Jerkshad and jighead gone. No idea what that was.

I tied on another Orange Tiger and cast it out. It was grabbed before it reached the bottom by an enormous Pike. It took plenty of line and made a few leaps, but it was nicely hooked in the side of the mouth, so the rod and drag soaked up the acrobatics. When I dragged it up close to me and unhooked it, I measured it at about 45cm.

Another grey morning on the flats

The first flathead had plenty of attitude 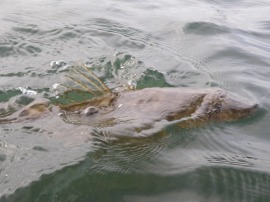 This Pike was over 45cm

Big Pike can easily slice through a light leader 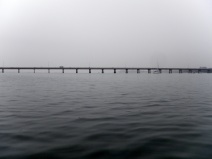 The best fish of the day

I swapped over to a Zman Minnowz soft plastic in the Houdini colour. I thought the paddle tail might stir up the flathead. The tide was moving up fast and the drizzle kept falling. I only had 20 minutes left and then I would be pushed to far back to see where I was casting. After a few minutes of working the Zman I felt stop dead on the bottom. Then the fish started swimming. For the first time in ages I had a good fish hooked and I realised how little work my drag had been doing. I decided to pull it back to the shoreline – it was too big to grab while wading. After several good runs, I pulled a good 60cm flathead up, on to the sand and put it in the keeper bag.

The tide was now too high to carry on here, so I finished fishing at about 12.00 noon.