Things looked pretty good for Wednesday – there was a bit of rain forecast but the wind would be light, turning into a northerly. The moon would be about 65% full and low tide would 0.5m at 9.43am. These are ideal conditions to fish at Bribie Island. Arriving before dawn, I could fish the second half of the run out tide.

I arrived on the island side of the bridge at about 5.30 am. The water was running out pretty fast. I put on my waders and clambered down the rock wall to the south of the bridge. The bridge lights often bring the smaller fish or prawns into this area but there was no evidence of their presence. The water was clear, but there was a fair amount of weed floating around. I tried dark and light, big and small soft plastics but did not get a bite. Just after first light at about 6.00 am I decided to move south.

I drove down to the car park in front of the Seaside Museum. Conditions were perfect – I could see where the fresh water drain was pouring over the ledge into the channel and I positioned myself just south of this point. 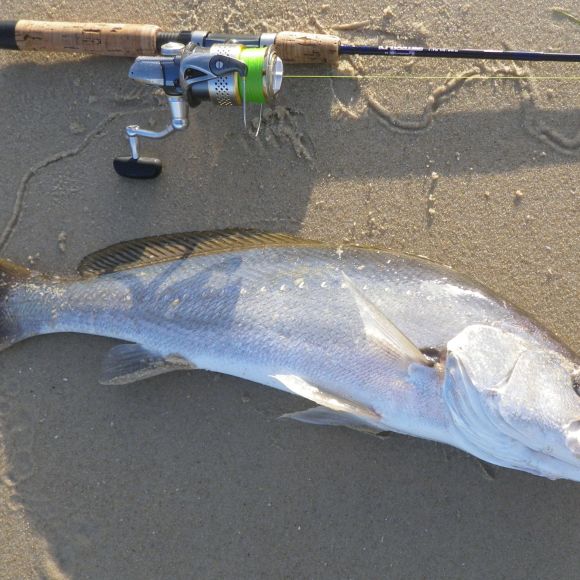 A 55cm Jewfish – not quite big enough 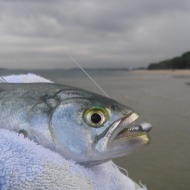 Choppers will have a swipe at anything 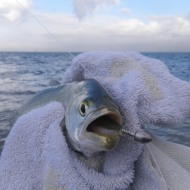 Tailor are just so aggressive

The flats at Buckleys Hole 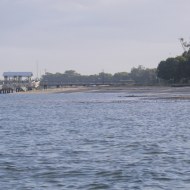 There is lots of structure along this shore line

I was fishing with my light spin rod and running 8lb fluorocarbon leader down to a 1/8th ounce, 1/0 hook, jighead. I started with a GULP 4” Minnow in the Smelt colour. I cast over the ledge, let it sink and bounced it back along the bottom, parallel with the shore. After about three casts, there was a solid bite, then line started peeling. It was slow at first but then it took off, as it realised it was hooked. It took about 10 metres, paused and then took another 10. It was a heavy fish. It turned and swam back towards the ledge. I tried to apply some pressure and lift it over but it put its head down and swam under an overhang. I tightened the drag a little and then slowly dropped the rod tip. As the line slackened, the fish swam out. I put the pressure on again but it went straight back under. I could feel the line rubbing on something and then pffffft – it was gone. When I wound in the line, the jighead and plastic were gone.

I swapped through a few soft plastics and hard bodies as the tide ran out. A small school of Tailor passed through and I lost a couple tails from my lures. I dropped down to a GULP 3” Minnow in the Pearl Watermelon colour on the same size jighead. On the first cast this soft plastic was hit as it sank. There was a quick initial run, towards me. I tightened the drag and started wading backwards. I did not want the fish to swim back over the ledge. I pulled a little too hard and caught site of a good sized Bream swimming away.

I carried on peppering the area with casts. I made sure I gave the soft plastic plenty of time to sink to the bottom. On a couple of casts I felt a faint bite, as I lifted the lure off the bottom. At about 7.35 am I cast out and paused. When I lifted the rod I felt some resistance. Suddenly line was peeling again. This time it was heading out into the channel. I moved closer to the ledge and gradually recovered some line. It was another slow powerful fish. It gradually tired and as I pulled it over the ledge, I could see it was a Jewfish. It made few more runs but I soon had it safely on the sand. It was about 55cm long. Unfortunately it had completely swallowed the jighead, so I left it in, cut the leader and released it, after a few pictures. I could not find anymore, so I moved on.

I waded to the south, casting along the edge of the drop off. Things were uneventful for about 45 minutes. I was now standing in front of the tidal lagoon at Buckley’s Hole. Suddenly, something grabbed the soft plastic as it dropped into the water. It took off and then let go. I continued retrieving the lure, quickly and just before it reached me, the fish grabbed it again. It jumped around and made plenty of lunges and short runs. It was a small Tailor. As it came over the ledge, it had two other fish following it. It was only about 30cm long but nicely hooked. I picked it up and took a few pictures before releasing it.

Things went quiet so I slowly waded back along the shore line to where I had started. It was now almost low tide and the water was getting dirtier and weedier. I was still using the GULP 3” Minnow soft plastic. At about 9.00 am I was ready to give up. As I speeded up my retrieve to pull the lure clear of the ledge, a fish grabbed it and pulled away. It went straight back over the ledge and headed for the bottom. It took a bit of line but soon calmed down and after a minute or two, I had a nice 36cm Bream to finish the session.

As I drove home the heavens opened again.