On Tuesday I had some work to do in the morning and the wind was blowing hard. By lunchtime, I was keen for a fish, so I decided to drive down to Deepwater Creek, which is just south of 1770 and see what I could catch.

At about 3.00 pm I set out to explore. I have fished a few sections of the creek. It has both freshwater and saltwater parts with a weir separating the two. When it rains heavily, the water runs over the weir and it would be possible for fish who can survive in both, to move up stream. Last year I caught my first tiny barramundi in this creek. I am sure that there are some bigger ones lurking in this system.

It’s important to protect yourself from the bugs. You want to be fishing at dawn or dusk and unfortunately this is the time when they are at their fiercest.  This is a fresh/ saltwater swamp, so after a bit of rain it is buzzing. I find minimising your exposed skin is really the best solution, so I wear long trousers and a long sleeve shirt and fishing gloves. I then use a good repellent on my neck and face.

I started on a section of the fresh side of the creek. Finding a spot to cast from is always a challenge. There are overhanging branches and vegetation everywhere. There are also fallen trees and stumps at regular intervals. You must be prepared to lose plenty of gear. I was fishing light. I was using my G.Loomis TJR fast action, light spin rod, Shimano Stella 2500 reel, 10lb braid with a 10lb fluorocarbon leader. There was no movement and the wind was ruffling the tree tops. I decided it was time to think out of the box – the DUO lure box. With so many snags I decided to give a small surface popper a try. I tied on the DUO Tetraworks Pocopoco in the Clear Rainbow colour. This is a very small popper that is great for catching bream over weed beds. It is well made with the usual great DUO paint job and excellent finish – but its real strength is its noisy blooping action.

I cast it out to mid-stream and let it sit for about ten seconds. I took up the slack and it loudly blooped towards me. After each jerk with the rod tip there was another bloop and splash and then I would pause. After three pauses, there was a swirl in the tea tree stained water behind the lure. On the next bloop a fish attacked and ran for bit but then spat the lure out. I could not see what it was.

I cast out to the same spot, there was another swirl and then a surface strike but the fish missed the lure. Popper fishing is always like this – you swing from delight to disappointment, all within a 10 second retrieve. I cast out again and again and I had another bite and run but no hook up. I decided to return later. 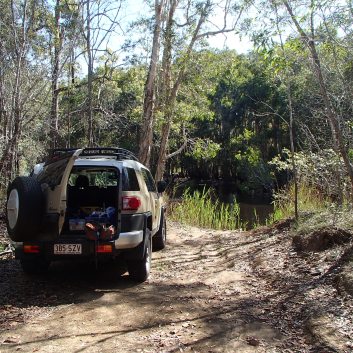 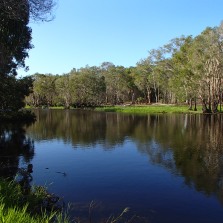 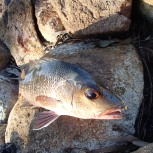 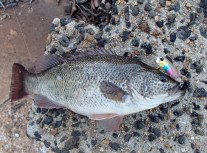 I moved down to the saltwater section and found a good looking stretch of bank with sunken timber and lots of mangrove roots. I swapped to a soft plastic lure – a GULP 3” Smelt Minnow and as the water was hardly moving, I dropped down to 1/12th ounce, size 1 hook jighead. As I cast along parallel with the bank, small bait fish hopped along in front of my lure. It was now about 4.30 pm and there were a few surface bust ups, in close to the mangrove roots. I lost a few jigheads and leaders to the submerged timber, but I kept re-rigging.  At about 5.00 pm something slammed my lure just before I was going to lift it clear of the water. The rod bent over and it tried to head straight back towards the mangrove roots. With 10lb leader I was not going to force the fish out once it buried itself – so I quickly tightened the drag and gambled that the G.Loomis would be a good enough shock absorber. This worked and I turned the fish back towards mid-stream. It pulled hard but after a minute or two it was tired and I carefully pulled it clear of the water. It was a Mangrove Jack and measured 38cm. I took a few pictures and released it.

After another 30 minutes I decided to turn my attentions back to the fresh water section of the creek. I wanted to see if I could catch what had been chasing my popper, earlier. I went back to the other spot and I tied the popper back on. It was now about 5.30 pm and the shadows where getting longer. I cast into the middle of the stream, where the fish had been earlier, but with no luck. I cast closer to some tall swamp grass on the far bank and saw a faint swirl behind the popper. I put the next cast back in the same spot and this time the fish took it in one great gulp. It was a chunky spangled perch – about 30 cm long. There is obviously plenty to eat in this system.

I don’t think the strikes earlier in the day had been from this species, they had been much more aggressive. Perhaps they were from some tarpon, which can be caught all through this system.  By about 6.30 pm it was too dark to carry on so I stopped for the day. Exploring new systems can be hit and miss but this afternoon was definitely a hit!