By Thursday, the rain had passed over but the wind had picked up considerably. I was up early and decided to try fishing at Wreck Rock. The tide would only be low enough to reach the rocks I wanted to fish from, for about 90 minutes.  The incoming tide would then force me back.

I arrived in the pre-dawn light and walked out to the beach. The sky was gradually turning orange and the wind had dropped right off. It was very light and cool, from the south-west.I walked out on to the rocks on the north edge and picked my way out as far as I could go. The wind had dropped but the swell was up and although the water was warm the cold breeze was nasty. 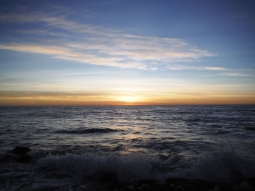 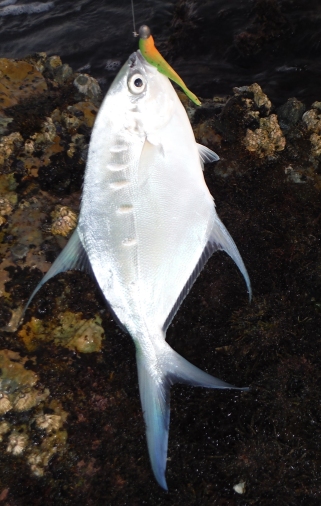 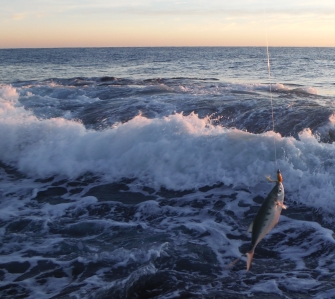 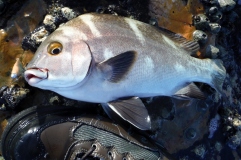 I knew there would be dart around and predictably, my first cast with a 3” GULP Lime Tiger Minnow soft plastic was just what they wanted. I pulled the first small dart out of the water just after 6.00am.I was sticking with a light 12lb fluorocarbon leader but went with the slightly heavier 1/6th ounce, size 1 hook jighead to counteract the swell.

The dart kept coming but I was hoping for something more significant so I put on the GULP Mantis Shrimp that had caught the slatey bream on Monday. I fished this around for 20 minutes with only a few small hits from the dart. I swapped back to a GULP 2” Shrimp soft plastic in the Banana Prawn colour. This instantly caught the dart again.

I decided to change up to a bigger profile again and tied on a GULP 5” Jerkshad in the Peppered Prawn colour. I cast this one a fair way out towards some a nearby bommie. On its way back to me it was swiped at by a couple of Long Toms, but I did not hook them.

I hit the same area with a few more casts and suddenly there was a quick tug and the reel started screaming. The rod bent over and the fish took plenty of line in a blistering initial run. As soon as it paused I checked the drag tension and realised it was actually quite tight. I tried to get some line back but the fish immediately set off again and snapped the leader. Trevally or maybe a Mackerel, either way a 12lb leader was not going to stop it. I re-rigged with the heaviest leader I had in the bag – 20lb fluorocarbon and cast back out. I peppered the area with casts but whatever it was had moved on.

The wind was now picking up again and the incoming tide was forcing me back along the rocks. I swapped to a GULP Green Camo 4” Minnow and carried on fishing. The dart kept hitting this one and then something slower and heavier grabbed it. It turned with the swell and took a bit of line. It then started swimming away faster, once it realised it was hooked. After a few minutes I pulled it up onto the rocks with the aid of a breaking wave. It was another good sized slatey bream with bright orange markings behind its lips.

I decided to keep this one for supper and so I retreated to the dryer rocks to bleed and clean it. By the time it was gutted the tide had come up further and the wind was really starting to blow so I gave up for the day.