By Tuesday morning conditions were very different. The wind and swell had almost completely dropped away and the skies were clear. At about 5.00 am I set off for the rocks at the far tip of the Hat Head headland. As I walked along the pathway I could clearly see the current line snaking across the surface of the bay. It would be another very big tide as the moon was huge.

When I reached the spinning ledge I put in a few casts with the 110mm River2Sea Dumbbell Popper, as soon as I could see where I was throwing it. I generally use my Daiwa Demonblood rod to throw this surface lure around. The popper blooped nicely across the shimmering water but there were no hits.

I swapped to the lighter, Daiwa Air Edge Surf 96 L rod, rigged it with a 20lb fluorocarbon leader and tied on a ¼ ounce , size 1/0 jighead. I put on a GULP Crazylegs Jerkshad soft plastic in the curry chicken colour. The tailor seemed to have vacated the area directly in front of the spinning ledge and the calmer conditions made the rocks further round the headland accessible. I moved around to the front of the headland and reeled in a small bream. I swapped through a few different size and coloured soft plastic and found a few more small bream. Perhaps the calmer seas had turned the tailor off.

I paused to re-rig and as I did so there was a loud blow about 40 metres out in front of me. A whale and its calf arched their black humps and continued past. A few moments after they disappeared, their very fishy blow cloud blew ashore – a wonderful site but a very unpleasant smell.  Next time they surfaced they were about 350 metres away – but they paused to put on a short tail slapping show. A close encounter with a whale is always great and it is about the only time I stop fishing and just watch the ocean for a while.

I decided to change tactics – perhaps the whales and dolphins (who followed them past) where following some fish. I swapped lures to a MARIA Mar Amigo 65mm 15 gram sinking vibe lure. This is another one of those carefully crafted Japanese lures that casts like a bullet, sinks fast and has a great action.

Clear skies and whales in close

They kept coming past

MARIA Mar Amigo gets a tailor 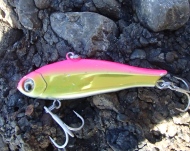 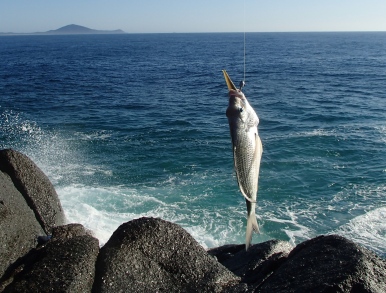 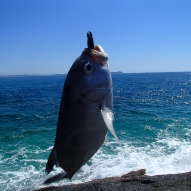 I cast into the foamy wash, just in front of the rocks and after about three casts I felt the mad head shakes of a hooked tailor. It was only a small one, about 30 cm long, but they were clearly still hanging around. They came and went every 15 minutes of so for the next couple of hours. They never got much bigger than 30 – 35 cm so I did not keep any. I swapped to the DUO Realis Jerkbait 110 SP hard bodied minnow which also caught a few, but the smaller profile and deep diving nature of the MARIA lure probably enticed more hits.

At about 9.30 am I moved back round to the Spinning Ledge and decided to try a soft plastic again. I chose the GULP 4” Minnow soft plastic in the Green Camo colour. I rigged it on a slightly lighter 1/6th ounce, size 1/0 hook jighead and I had swapped down to 16lb fluorocarbon leader. I cast out and let the lure reach the bottom. I paused, then gave it a few hops along the bottom. As I speeded up the retrieve to lift the lure clear of the rocks a fish struck. It put a nice bend in the rocks ad initially I thought it was a decent tailor. It soon slowed however and after a brief fight, I pulled a small trevally clear of the water.

A few more casts in this spot yielded no more fish so at about 10.00 am I gave up for the morning. No trophy fish but plenty of action and plenty of whales to watch.