The bad weather continued. It had rained heavily over the weekend and most of the night. I decided to try for a few fish on the dawn high tide on the old oyster jetty flats at Bribie. High tide would be at 5.30 am. After all the rain the temperature had dropped to about 20 degrees. I aimed to arrive and start fishing at first light which would be at about 4.30 am.

The wind was forecast to be a 10 knot easterly, but soon after I arrived it was actually blowing at about fifteen knots from the south west. The sky was grey and sunrise was completely smothered by the low cloud. There moon was not doing much and therefore there would be little run on the tide.

Everything looked grey so I decided to use a brightly coloured GULP Crazylegs Jerkshad in the Curry Chicken (red and yellow colour). This soon attracted the attention of the resident longtoms. They, or perhaps a particularly persistent individual, seemed to be everywhere. I think they find it hard to resist a big curly tailed soft plastic. According to the Australian Museum’s website the Stout Longtom, Tylosurus gavialoides (Castelnau, 1873) is “a long slender species, coloured blue to green or grey above and silvery below. The snout and fins of adults are usually dusky. The species is endemic to Australia”.  When I have seen people kill them to eat there are two strange facts that emerge:

If you can get past the green bones I am told they taste sweet. Because of their long snouts and sharp teeth they are quite difficult to hook. 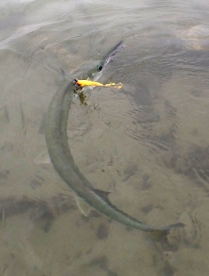 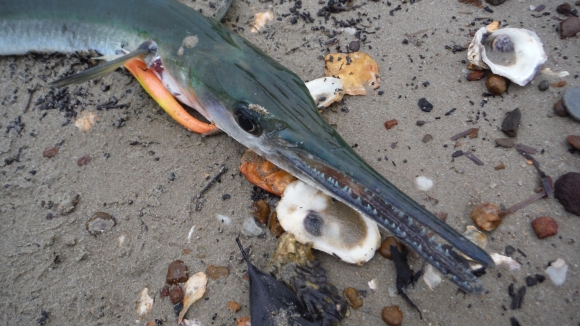 At about 6.00 am after several bites and semi-hook ups, I seemed to be attached to a fairly big one. It thrashed about and when I pulled it in, I realised it had probably only stayed on the line as it was hooked under one of its fins. I did not want to keep it for dinner so I unhooked it and released it.

At about 6.30am, it began to rain steadily, so I gave up for the day. A tough session, but at this time of year it often is.