My sincere apologies for still writing about fishing trips back in May. There has been lots more recent fishing, but I have not had much time to write about it. I will now do my best to catch up and get current.

I finished my May trip to 1770 with a couple of great fishing sessions down at Wreck Rock in Deepwater National Park. I timed my arrival for a few hours before low tide and fished the north end of the rocks that are only accessible around low. Conditions were good with fairly light winds and swell. However, once a couple of waves splashed over me the wind was pretty cool. This area often produces trevally and some good dart.

Today was no exception. I started fishing with a GULP Jerkshad soft plastic in the Lime Tiger colour. The Daiwa Air Edge no longer had a tip so I swapped back to the NS Black Hole Cabin II – S-862 L Spin Rod matched with a Shimano Sustain 4000. This rod is a little stiffer and has a little more grunt than the Daiwa. I was fishing with 16lb fluorocarbon leader and 1/6th ounce, 2/0 hook jighead.

As the tide receded I moved out along the rocks. There was a fishy looking corridor between two sets of barnacle covered rocks. The water was no more than a metre deep and far shallower in places. I pulled the plastic along parallel with the shoreline and a silver fish came up and grabbed it. It took off and I knew it was a trevally. This was a reasonable sized fish about 45cm long and it kept turning sideways and using the swell to try and get away. After a while I had it subdued at my feet. I released it and went looking for its friends.

It did not take very long. About ten minutes later I had another trevally come racing up behind the soft plastic and grab it. This one swam straight towards me but I manage to keep the line tight and after a short fight I landed it. 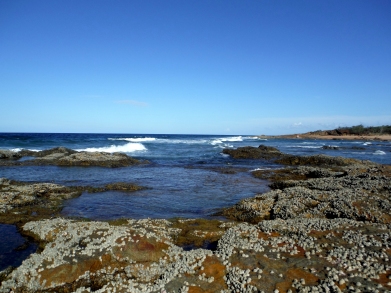 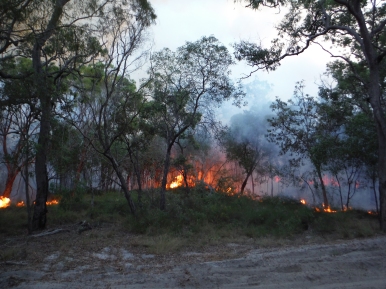 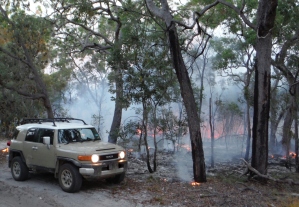 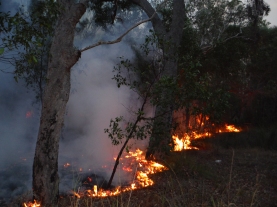 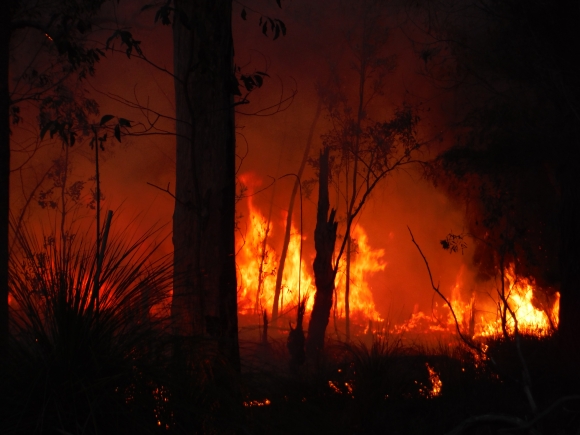 About 15 minutes later another group of trevally came through and this time I saw several follow the lure in before one grabbed it. It took off out to sea and managed to get the line wedged down between the barnacles. I loosened the drag, bug the line was wrapped around the rocks and it soon snapped. It was now about 4.00 pm, and the tide was slackening so I gave up for the day.

I drove back along the four-wheel drive track towards 1770. The local country fire service were doing a ‘controlled’ fuel reduction burn. As I drove through the smoke and flames I wondered what and ‘uncontrolled’ burn would be like. Instead of smelling of fish my car was going to smell of barbequed fish for the next few weeks.