I only had time for a late morning session on Wednesday. I decided on the Pumicestone Passage again. I arrived at Bribie Island around 9.00 am. It was just about high tide. I decided to go back to the area where I had caught so many Flathead last week – the mouth of the tidal lagoon in front of Buckley’s Hole.

The sky was clear but there was a cold, westerly breeze blowing at about 10 knots. The wind was blowing the weed on shore. I waded out onto the sand spit and started walking north, along it to the point where the lagoon drains over the coffee rock ledge into the Passage.

I was fishing with a 1/8th 1/0 jighead and using the old favourite GULP 4” Minnow soft plastic lure, in the Pearl Watermelon colour. I had a 10lb fluorocarbon leader. Something aggressive grabbed at the plastic a couple of times but I could not seem to hook up. Usually this means small Choppers (juvenile Tailor) are hanging around. A few casts later, I lost the lure to a bite off. I re-rigged with the same set up. With my first cast I hooked another fish. The frantic headshakes suggested it was a Tailor and then it leapt out of the water to give me a better view. It was hooked nicely in the mouth and I dragged it back to the sand. It was just about legal at around 35 cm, but I released it. 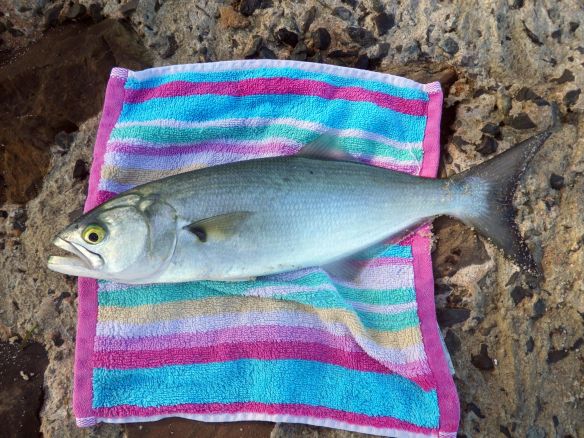 Unfortunately then Dolphins turned up. They are beautiful creatures and it is nice to get close to them but their presence does nothing for the fishing! They splashed around just beyond the drop off and made a couple of surges, sending bait flying everywhere.

I moved a bit further north and waited for things to settle down. The tide was really running out now. The weed had cleared and the wind had dropped away. As I waded towards the Island jetty I caught my first Flathead of the day – it was just under 40cm so I released it. I then caught two more small ones from the same spot. I moved further north and cast into the shallow water, just before the drop off. There was a solid thud – I dropped the rod tip and counted to ten. When I picked it up, I had a decent Flathead on the end. I waded back to the steps and landed the fish. I kept this one for supper – it was just over 55cm.

At about 12.45pm I gave up and went home, to thaw out. The fish were certainly not as thick as last week but they are definitely still around.