In January I fished a couple of dawn sessions on the flats in front of the Sandstone Point Hotel jetty, at Bribie. I caught a few flathead, mainly on the bottom half of the run out tides. I also fished the mouth of Pacific Harbour which produced a few good sized flathead on various coloured jerkshad soft plastics.

Later in  the month I spent some time at Pottsville and Hastings Point. The Hastings Point headland always looks very fishy, but during the holidays it is a pretty busy spot. I tried a few daytime sessions with small soft plastics there, but only caught a few Butter Bream on light line. 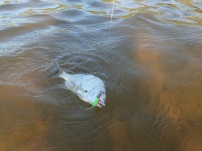 On the bigger tides I fished in Mooball Creek (behind the beach). This is a sandy bottomed shallow creek that has a few holes and bends with some deeper water. I found plenty of small flathead, fishing with a 3″ GULP Minnow soft plastic on a 1/8th and 1/12th ounce, size #1 hook jighead. I stuck to 10lb leader and eventually found a couple of flathead that would have been been big enough to keep. There were also plenty of small bream and whiting in the clear water.

With Christmas done and dusted and the New Year underway. It was time to find an interesting activity other than eating and drinking. When your waders are getting tight you know you are in trouble. I needed to get moving and a morning fishing session is a great way of doing that.

The weather has been far from ideal for the trailer boat based angler over the Christmas and New Year holidays. High winds and seas have pushed a lot of boats into the Pumicestone Passage. This means things have been fairly busy during daylight hours. 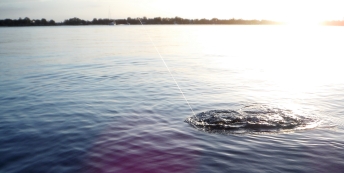 On Saturday I was up at 3.45am and drove up to Bribie Island for a 4.30 am start. Low tide would be at about 8.30 am and the wind was forecast to pick up to a 10 knot south westerly. The moon was waning and had been full about a week earlier. I decided to fish the flats in front of the Sandstone Point Hotel and waded out under the bridge just as the light went out.

I started fishing with a GULP Jerkshad in the Pearl Watermelon colour, mounted on a 1/8th ounce, size 1/0 hook jighead. After a couple of tough sessions in this area I chose a 10lb fluorocarbon leader. I cast around under the bridge without any luck.

I waded towards the old oyster jetty and swapped to a smaller GULP 3” Minnow soft plastic in the Smelt colour. I felt couple of bites from small fish and then a solid thud from a flathead. I struck a bit too soon and missed hooking the fish.

I swapped soft plastic lure again just as the sun broke the horizon. This time I chose a Jerkshad in the BBQ chicken colour. I was now just to the south of the jetty standing about 15 metres form the mangroves casting in to the areas of sandy bottom between the weed beds. There was lots of bait around and every now and then something would smash into it from below. I slowed down my retrieve and paused longer between hops. This worked and at about 5.15 I safely landed a 45cm flathead.

About ten minutes later I caught another. This one was about 50 cm long and things were now looking good. I continued to pepper the area with casts but I could not find another. I moved slowly south casting as I waded. At about 6.00 am the wind started to pick up and by the time I reached the green channel marker at about 7.00 am, it was really blowing. Despite the wind there were now plenty of boats running out into the bay. I caught a tiny bar-tailed (sand) flathead by the green channel marker and then turned to wade back towards the bridge.

I got all the way back to the jetty before I got another bite and infuriatingly, after a brief run the fish slipped off or spat out my plastic. I was now fishing with the GULP 4 “Minnow soft plastic in the Pearl Watermelon colour. Just as I came close to the bridge and was about to wade out of the water, I felt a good bite and dropped the rod tip. I paused for what seemed like eternity but was actually about 5 seconds and then lifted the rod tip. The jig head’s hook set in the fish’s mouth and it took off. After a short run it settled and I pulled it ashore. It was another flathead, about 50cm long.

I had three good fish for dinner. As always the key was getting out early, before the boat and recreational traffic got going. I am looking forward to some more peaceful sessions in the near future.

I only had time for a late morning session on Wednesday. I decided on the Pumicestone Passage again. I arrived at Bribie Island around 9.00 am. It was just about high tide. I decided to go back to the area where I had caught so many Flathead last week – the mouth of the tidal lagoon in front of Buckley’s Hole.

The sky was clear but there was a cold, westerly breeze blowing at about 10 knots. The wind was blowing the weed on shore. I waded out onto the sand spit and started walking north, along it to the point where the lagoon drains over the coffee rock ledge into the Passage.

I was fishing with a 1/8th 1/0 jighead and using the old favourite GULP 4” Minnow soft plastic lure, in the Pearl Watermelon colour. I had a 10lb fluorocarbon leader. Something aggressive grabbed at the plastic a couple of times but I could not seem to hook up. Usually this means small Choppers (juvenile Tailor) are hanging around. A few casts later, I lost the lure to a bite off. I re-rigged with the same set up. With my first cast I hooked another fish. The frantic headshakes suggested it was a Tailor and then it leapt out of the water to give me a better view. It was hooked nicely in the mouth and I dragged it back to the sand. It was just about legal at around 35 cm, but I released it.

Unfortunately then Dolphins turned up. They are beautiful creatures and it is nice to get close to them but their presence does nothing for the fishing! They splashed around just beyond the drop off and made a couple of surges, sending bait flying everywhere.

I moved a bit further north and waited for things to settle down. The tide was really running out now. The weed had cleared and the wind had dropped away. As I waded towards the Island jetty I caught my first Flathead of the day – it was just under 40cm so I released it. I then caught two more small ones from the same spot. I moved further north and cast into the shallow water, just before the drop off. There was a solid thud – I dropped the rod tip and counted to ten. When I picked it up, I had a decent Flathead on the end. I waded back to the steps and landed the fish. I kept this one for supper – it was just over 55cm.

At about 12.45pm I gave up and went home, to thaw out. The fish were certainly not as thick as last week but they are definitely still around.