On Thursday the seas were still up and low tide would not be until about 2.30 pm. The wind would hopefully have dropped by then and I could try fishing the beaches and rocks again. In the morning I decided to drive back out to Flat Rock on Baffle Creek and see if I could have some more fun with the Tarpon.

It takes about an hour to drive south from 1770, down the four wheel drive sand track, past Flat Rock, Middle Rock and Wreck Rock beaches, across Deepwater Creek and on to Flat Rock boat ramp on Baffle Creek.

By the time I arrived, the sun was already up and the insects were humming in my ears. You need plenty of insect repellent in these parts! The wind had dropped away and the tide was coming in. It would be high at about 9.00 am.  There were a few surface strikes and the bait was jumping around. I worked through a few different soft plastics on the light rod. The usual minnows, jerkshads and shrimps did not work, so I swapped to a Watermelon coloured GULP Minnow grub. I slowed the retrieve and let it flutter around in the current. After a few casts, there was a solid bite and I hooked up. The fish headed for the rocks and immediately tried to get under them. I was still fishing with 14lb leader so I tightened the drag and pulled it out. It was an estuary cod – about 45cm long. I released it and after another hour with no luck, I went off to the Baffle Creek Township, to find some breakfast.

The wind had dropped off so I decided to make my way to Wreck Rock to fish the last few hours of the run out tide. It would not be possible to get out to the spots I like to fish there, until two to three hours before low tide, from about 10.30 am onwards. So I drove back up the sand track and stopped for a nap in a shady spot. I woke to some rustling and found a mother emu and three chicks walking past. This really is a very unspoilt spot!

I drove on to Wreck Rock and walked out on to the beach. The sun was out and there was no one else around. The wind was now a 10 to 15 knot north-easterly and the swell was dropping. I decided to stay with the light spinning rod and 10lb leader. It was the middle of the day and I thought the fish would be fairly picky.

I started fishing on the calmer side of the rocky peninsula that sticks out to the north of the little bay. I put on a 1/8th ounce, size 1 hook jighead with a 2” GULP Shrimp soft plastic, in the Banana Prawn colour. After a few casts, the first taker was a small stripey perch, this was followed by an equally small bream. Both these fish where sitting at the base of the rocks in a few feet of water. About 20 minutes later, I dropped a bigger bream, as I tried to land it.

It was pretty warm so I decided to risk getting wet and wandered a bit further out along the rocks. I wanted something chunkier to throw out into the breaking waves, in front of the rocks and I chose a GULP Jerkshad in the Waremelon Pearl colour. I also upped my jighead to a slightly bigger 1/6th ounce with a 1/0 hook. I cast this out in to the gaps between the rocks and let it sink for as long as I could before hopping it back towards me. I lost a couple of rigs to the rocks and gradually moved further out as the tide dropped. At about noon I was almost at the end of the rocky peninsula. I cast clear of the rocks and let the jerkshad sink. On the drop, it was slammed and line started peeling. The swell was still significant and this fish new how to use it. As soon as I applied some pressure, it took off. There were rocks everywhere and I had a 10lb fluorocarbon leader on the end of a very light, fast action trout spinning rod. Patience – Patience – Patience would be necessary. I got a little line back and tightened the drag, very slightly. I watched the swell and used the waves to steer the fish towards me. I took several tries but eventually I had it out of the water and at my feet. It was a trevally, about 50cm long.  I love to eat fresh trevally, so I killed and bled it and put it in a keeper pond, about 10 metres back from the shoreline.

A climbed back out along the rocky peninsula and put on another Jerkshad soft plastic. This time it was in the green and orange Lime Tiger colour. I cast around for another trevally but could not find any out the front. I started casting into the foamy water right at the end of the line of rocks. Small dart kept attacking the soft plastic just as it reached the rocks and on a few occasions they almost beached themselves trying to eat it. On the next cast there was a solid hit and then a clean bite off. I re-rigged with 14lb fluorocarbon leader and put the same soft plastic/ jighead combination on again.

I cast out wide again and let the jighead sink but then I added some urgency to the retrieve, a few quicker, more violent jerks. This did the trick and just before I got the soft plastic back to the rocks, a fish grabbed it, dropped it, and then grabbed it again. I felt the hook set in the jaw and then the fish went ballistic. I knew it was a Tailor before I could see it and I suspect this was what had bitten me off, before. 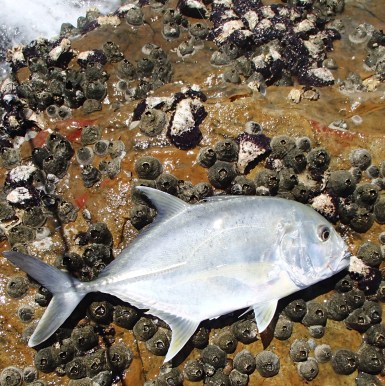 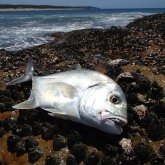 Tailor from the foamy wash

I pulled up a wriggling 40 cm tailor – I photographed it and released it. I shortened the mashed soft plastic then cast it out again. After a few jerks of the rod tip I had caught another slightly bigger one. Over the next 20 minutes I caught 4 more and dropped a few. The biggest was about 45cm. I am not sure how long they would stay in this area, but I suspect they are nearly always around until the water really warms up.

By 1.30 pm I was soaked and the fish seemed to slow a bit, as the wind and swell picked up again. I waded back towards the keeper pool, where I had left my trevally but I could not find it. Then I saw a big brahminy kite circling the shallows, about 50 metres away towards the beach. I watched as it swooped and plucked up the trevally – which it or another bird must have dropped halfway back to its nest. It struggled to get airborne again but eventually it got its full wingspan deployed and made it to the tree line. That was the end of my fish supper.