With the wind and swell dropping and turning into a light north-easterly, Friday looked like the perfect fishing day. I was awake at 4.00 am and decided to fish at Getaway Beach. I walked down to the small bay in the pre-dawn light.

I started at the north end of the beach on the rocky promontory. The tide was coming in and would be high at about 8.30 am. I cast at a semi-submerged bommie. I started with a GULP Jerkshad in the Lime Tiger colour on a 1/8th 2/0 jighead. I was still hoping there might be a jewfish/mulloway lurking somewhere around here. The first taker was a small stripey perch – not much longer than the jerkshad. I cast out again and got another. I moved further round and caught another. After about 30 minutes I had caught and released about 10 fish – all too small for a meal. The tide was coming in and I had to get off the rock if I wanted to avoid getting stranded.

I walked back to the south side of the rocky headland. I was now fishing with a GULP 4“ Minnow in the Pearl Watermelon colour. I cast it at a bommie and let it sink. N.B – The word ‘bommie’ is unique to Australia and is derived from a local aboriginal word – ‘bombora’ which can be loosely translated as coral reef outcrop. The sea was settling down but it was still not very clear and I could smell and see the algal bloom in the water. As I lifted my rod tip a fish attacked and hooked itself. It turned and tried to bury itself in the rocks. I pulled it out and landed it. It was a chunky stripey perch about 35cm long – I kept it. I believe these fall under the ‘all tropical sea perch’ category and have a minimum size of 25cm (but please correct me if I have misinterpreted the current Queensland rules).

I did not find another one but I did pull out small, bream, dart and trevally, after swapping down to smaller 3” GULP Minnows in various colours. I swapped to a small DUO hard bodied vibe lure and this caught also caught a few small dart. By about 9.00 am, as we passed the top of the tide, the sea was calm and the fish seemed to stop biting. I decided to go for breakfast and a sleep.

At about 2.00 pm I drove back down to Wreck Rock to fish the bottom of the tide. This was another good session. I caught plenty of dart and small bream and the catch rate picked up as the afternoon moved on and the tide started to run in. At about 3.30 pm, I upgraded to 15lb leader and swapped to a slightly heavier 1/6th ounce jighead, to counter the strong afternoon north-easterly wind, which had picked up. I was now fishing with a GULP 4” Minnow, in the Pearl Watermelon colour.

Just on 4.00 pm I felt a sudden hit and line started peeling. It felt like a chunky fish but in the swell it was hard to tell. It was fast and trying get down into the rocks. I felt more confident with the 15lb leader and I tightened the drag and put some pressure on. It fought hard but after a few minutes I pulled it up on a wave and grabbed it. It was another decent trevally, about 50cm long. They must cruise up and down these rocks. I have seen some much bigger shapes in the waves out front but they could be anything in this spot. By 4.30 pm the incoming tide pushed me off the rocks so I gave up for the day. 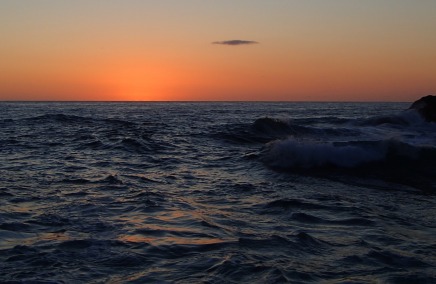 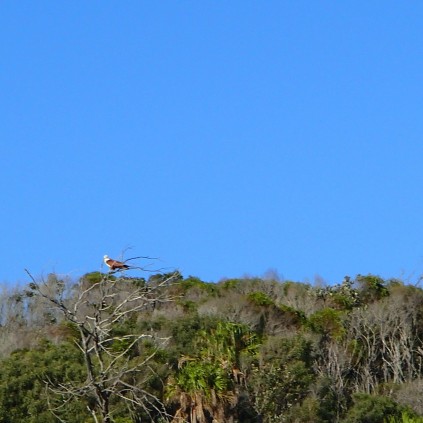 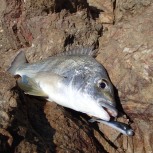 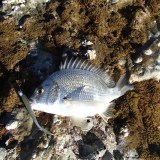 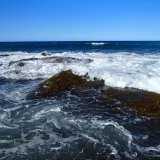