In the run up to Christmas I spent a few days fishing on the beach at New Brighton, just north of Brunswick Heads.

On Tuesday I wandered out for an afternoon fish and decided to walk towards New Brighton from South Golden Beach. I started at about 3.00 pm. I was using my Daiwa Air Edge 96L light surf rod and initially fishing with a 1/6th ounce, size 1 hook jighead. I was fishing with 10lb fluorocarbon leader. The moon was building up to full around Christmas Day, so the tidal flow was quite big. The wind was a fairly lively south-easterly, but the water was warm and still fairly clear.

This beach has very little structure apart from a few rocks half buried in the sand near New Brighton. However there are plenty of deep clearly defined gutters that are formed by the wind, tide and strong rips.

I cast around into the incoming tide. I was fishing with a GULP 3” minnow soft plastic in the Lime Tiger colour and I concentrated on the areas at the entrances and exits to the gutters. Each time I moved, I would get faint bites on the first couple of casts and then nothing. As the waves rolled over I could see these were coming from tiny dart. 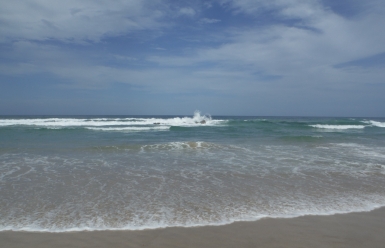 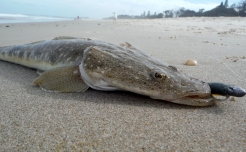 I paused at the exit to another gutter and cast my lure so it would come back past as it was washed out to sea. After a couple of hops a fish grabbed it. There was a brief fight but I soon pulled it ashore. It was bream about 28 cm long.

I moved south and eventually arrived at the small patch of rocks in front of New Brighton.  I swapped to a GULP 3” Shrimp soft plastic in the neutral grey flecked peppered prawn colour. I cast around the rocks and again felt a few small bites.

The wind was now blowing very hard so I moved to the south side of the biggest rock and put a few casts in around its base. This paid off and on about my third one I felt the unmistakeable solid thud of a flathead bite. After another fairly brief fight I landed a 43 cm flathead. I took a few pictures and sent it on its way.

By 4.30 pm the wind was a howling southerly so I decided to give up. As I walked back to South Golden Beach I noticed a young gent throwing a small slug into the surf and witnessed him catch some small dart, as his hungry dog looked on.