On Wednesday morning I was up before dawn to have another shot of catching something decent in the surf. The wind had changed to a strong northerly over-night. When I walked out on to South Golden Beach at about 4.45 am, I could see the water was pretty stirred up.

The wind was up and gusting between 10 and knots. As the water hit my feet I noticed it had cooled down considerably overnight. I was fishing with my Daiwa Air Edge rod and Shimano Sustain reel combination again. This time I tied on about 1 metre of 10lb fluorocarbon leader. The wind and surf was going to make it very hard to cast a lightly weighted soft plastic lure any distance, so I decided to rig up a hard bodied lure.

I chose the DUO Realis Vib 62. This is a Bass lure made by my favourite Japanese lure manufacturers DUO – http://www.duo-inc.co.jp/bass/en/realis/vibration62/ . I have tried plenty of cheaper imitations but I keep coming back to this one. It is an 11g sinking vibe lure with a loud rattle and comes in some great colours. There is something about its action and its ability to instantly find its rhythm that I really love. Even when bumping along a shallow, sandy bottom it keeps vibrating. The other advantage in the surf is that it casts like a bullet. I have found these lures at Jones Tackle http://jonestackle.com.au/ and also at Motackle http://www.motackle.com.au/. I understand that DUO has just secured a new Australian distribution deal so I hope this means they will become more widely available.

I wandered south as the horizon started to light up. I felt a few bumps and nudges in each new gutter but did not connect. At about 5.00 am the sun came over the horizon. I was now standing at the south end of a very long gutter that had a pronounced sand bank lip. I could see the small dart shadowing the lure as I pulled it towards me. I put in a long cast and started to jerk the lure back towards me. After about three pulls something smashed into the lure. I struck hard but the line felt slack. Then I realised the fish was just swimming towards me. It changed direction and I could feel that it was solidly hooked. It travelled sideways for a bit. I had the drag fairly loosely set. This is important in the surf as the pull of the waves will snap a light leader very easily.  I soon had a respectable 30 cm bream at my feet. I released it and looked for some more without any luck. 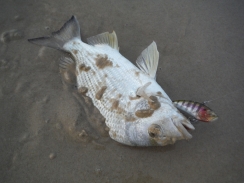 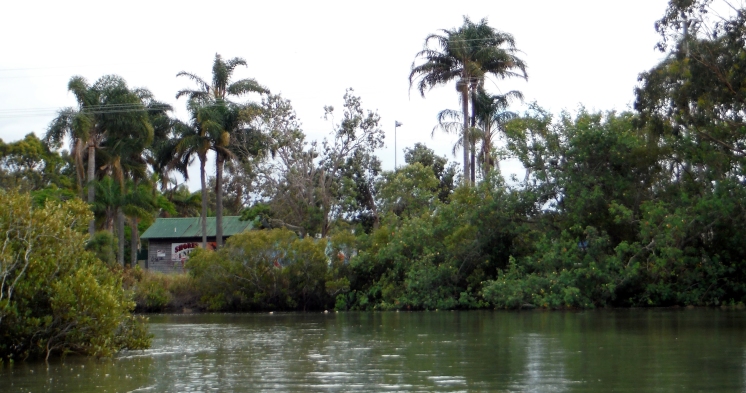 On Christmas Eve I decided to fish the big incoming morning tide in the section of Marshalls Creek that is open to fishing. This is a very beautiful stretch of water just off the Brunswick River. Its lower reaches are closed to all types of fishing but there is a section opposite the New Brighton shop where fishing with rod and line is still permitted. This area is fairly shallow on all but the biggest tides but it looks very fishy. There are big sand bars, overhanging trees and dense mangroves. I waded around through the early morning high tide and got a few bites. I saw plenty of bream, luderick and mullet swimming around but I could not hook any. It was peak holiday time and there was a constant flow of small boats which did not improve my chances of catching anything. After a few hours I gave up, but I will definitely be back.

Happy Christmas to all