On Thursday the weather was much the same and low tide was not until 11.20 am. Most of my favourite fishing points around Iluka are low or falling tide spots, so I decided to have a lie in. Of course a fisherman’s lie in just means getting up at dawn, rather than 90 minutes before dawn, but it was nice to get a full 8 hours sleep.

At about 8.30 am I drove round to Woody Head to have a look at conditions. Although the tide was far enough out to make fishing possible, the swell was still bashing up against the rocks. The swell had been a steady 1.5/ 1.8m all week. It was caused by the slow moving tropical storm that had missed the Queensland coast the week before, but stirred everything up. Discretion is the better part of valour and I was not going to risk my life for a fish, so I walked back to the car.

I drove round to Shark Bay again. I walked out onto the rock and tied on 55g HALCO Twisty in the brass/ gold colour. I catch far more fish on the brass/ gold colour of this lure than the silver colour – no idea why. I started with big long casts on the heavy rod and after five or six casts, I had a 30 cm tailor. A few casts later I had another…. and another. I swapped up to an 80mm HALCO Roosta Popper in the Fluoro Pink colour. I blooped this back towards me, making plenty of splashes and stopped for a few seconds every now and then. After a few bloops, a bigger tailor grabbed it and I soon had a 50cm tailor at my feet. 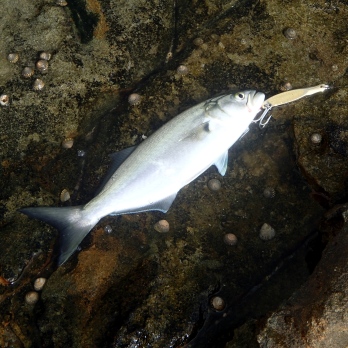 It was now about 11.00 am and I swapped to the lighter rod, 14lb fluorocarbon leader, a 1/6th ounce, 1/0 hook jighead and a GULP 4 inch Minnowp soft plastic in the Pearl Watermelon colour. The first cast was smashed by a tailor which then spat it out. The second, attracted a few snaps from a long tom, which followed the soft plastic right back to me. After about ten more minutes of casting I caught another 30cm bream.

I decided to try the other side of the rock platform but neither soft plastics nor slugs could raise anything there so at about 12.00 noon, I gave up.