In mid-July I had a great winter afternoon fishing session at my favourite old stomping ground – the flats of the Pumicestone Passage at Bribie Island. It was a beautiful clear afternoon and the tide would be running out. I waded out to the north of the Bribie bridge, to a point where the water was about waist deep. I was fishing with a 2 metre long 12lb fluorocarbon leader and a fast action 6’6” spinning NS Blackhole spinning rod. I was using a GULP 4“Minnow soft plastic in the Pearl Watermelon colour which I loaded on to a 1/8th ounce, 1/0 jighead.

I cast in a semi-circle to the north of me. The tide was running out and I hopped the soft plastic along the bottom with two or three second pauses between each hop. The idea was to make my lure look like a wounded/ drunk baitfish wobbling along the bottom with the run-out tide. After about three casts the strategy worked, and I felt the solid thud of the flathead bite. I dropped the rod tip for a few seconds then pulled it up and set the hook. I let it take some line and the fast action rod absorbed its initial lunges. I slowly walked it back the beach under the bridge where a handy Woolworths shopping trolley provided a good spot to unhook it. It was about 47cm long and would be dinner. 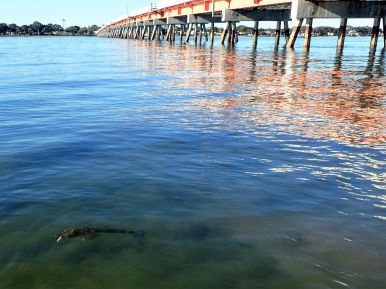 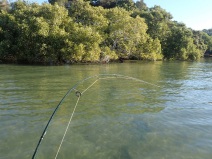 I carried on the technique moving south under the bridge and caught 4 more flathead through the afternoon.  Of these two were just under 40 cm and one was a little bigger. I also hooked a couple of pike who seemed to be hanging around over the weed beds.