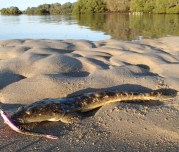 After a disappointing outing on Friday I was up earlier on Monday.  It was full moon. In fact, it was a super moon. That is probably why I could not sleep. I did not have much time, so I drove up to Bribie Island for a quick morning session.

The fish are always out there somewhere, so when they are elusive, it is not a bad idea to go back to basics. I decided to drop the leader down to 8lb fluorocarbon, use the fine wire Bream Pro 1/8th ounce, #1 hook jigheads and start with 2” and 3” GULP soft plastics in natural colours – Peppered Prawn, Banana Prawn, Smelt, Pearl Watermelon, etc. This set up should at least attract a few pike and bream.

I started under the bridge lights, on the mainland side of the Bribie Bridge. There was a very light south-westerly wind blowing and the moon was amazing. It was so bright that the fish would certainly have been confused by it. It was just after 5.00 am and low tide had passed at 3.53 am. It had been one of the years lowest at 0.2 metres. The tide was running in fast but there was no sign of any bait under the bridge lights. I cast around with a GULP 2” Shrimp in the Banana Prawn colour. I felt a couple of grabs and half hooked a couple of pike, but they both wriggled off. I had one solid bite, that might have been a small flathead, but it let go before I could find out.

At about 5.30 am, I decided to swap back to the mainland side of the bridge. I drove back over and waded out into the shallows. I stayed about 10 metres north of the bridge and cast towards it. I soon found the pike hiding in amongst the weed clumps and rocks.

I gradually moved south, under the bridge. The mad moon was creating a fantastic bright orange sky, as dawn was breaking. I think the sunrises on the east coast of Australia are the best in the world and this one was as good as they get. My camera does not do it justice – but I am sure if you are as mad about fishing as I am, you will have seen a few of these.

The tide was moving in quickly and the water coming in from the bay was very cold.  I made my way south to the fast disappearing sand bank and fished around this area. It is tough to fish here when the sun is low in the sky, as you cannot see where the sandy patches and weed beds are. You just have to slowly and methodically cover the ground.

I swapped up to slightly bigger GULP Jerkshad in the Cajun Chicken colour. After just a few casts this produced results with a definite hit. I paused but there was no fish there. It was just about 7.00 am. I did not have much more time in this spot as the tide was running in very quickly. I slowed everything down and tried to put the next cast back in exactly the same spot. I left the lure on the bottom for a good ten seconds. I hopped it slowly back towards me – nothing. I cast about a metre to the left and repeated the process. This time after my second pause on the bottom, whack, another solid flathead bite. This time I dropped the rod tip and counted (fairly quickly) to ten. When I lifted the rod the fish was hooked. It felt much bigger than it was (about 45cm) but it was a relief to finally get one.

As the morning progressed the wind picked up a little. The scenery was fantastic and the weather very good but I just could not find the fish. I swapped from small plastics to big plastics, jerkshads to paddletails to grubtails. I tried my DUO hard bodies but nothing worked.

At about 9.00 am I had to give up. It looks like I am going to have to put in a lot of practice to find my form again!

After more than a month away from the water, I was in a hurry to get out and do some fishing. I finally had a morning off on Friday and jumped in to the car and drove up to Bribie. I arrived at about 5.30 am, just as the sky was beginning to brighten. I pulled on my waders and realised I had forgotten my camera  (which turned out to not really be a problem). I admired the new picnic tables the council has installed on the mainland side of the bridge. I presume they realised I needed a proper area to eat my lunch and drink my coffee.

High tide would be at 6.59 am and full moon was due on Monday. There was virtually no wind – perhaps a slight cold south-westerly. I cast around under the bridge lights and caught a Pike on a small minnow soft plastic. I had a few more bites but did not hook any more. The sun came up and I moved to the south. I fished around the sandy patches, drains and weed banks, hoping to locate a flathead, but it seems the fishing gods were punishing me.

I fished for hours  and watched the tide run out until I could reach all my favorite spots, but I could not raise a bite. At 10.30 am I drove over the bridge to the sandy flats, just north of the entrance to Pacific Harbour. The tide was now more than half way out and I fished all along the coffee rock drop off, that runs along this stretch of shore. I tried everything in my tackle pouch – big and small soft plastics and hard bodies but again, I did not feel a bite.

After seven hours without success I finally gave up at 12-30 pm. No fish – I may have lost my mojo!

Sorry readers but I need to post one more very old report for the sake of the historical record. In a thousand years, when the new inhabitants of our planet decipher this blog from a fossilized hard drive, they will be truly perplexed. Imagine the discussion: ‘Yes it appears they wandered around in shark infested waters in long rubber trousers and then used brightly coloured plastic fish to try to catch more fish…….. and when they did finally catch them, they usually let them go!’

So cast you mind back to late June and a cold snap. The flathead fishing had been good but was gradually slowing. The temperature had been down to 9 Celsius overnight and the water was very cold. A light, cold, south westerly wind was forecast. The moon was 50% full and waning. There had been some very light showers overnight and after sun up, the sky was grey and cloudy.

I waded out under the Bribie Bridge at about 6.00 am. Low tide would be at about 9.00 am, so there was still plenty of water covering my favourite target areas. The first taker was a 40 cm flathead, lurking under the lights to the north of the bridge. It swallowed a GULP Pearl Watermelon Jerkshad at about 6.20 am. I was fishing with a 1/8th ounce, 1/0 jighead and using 10 lb fluorocarbon leader. I let the fish go and moved on.

The sky looked ominous. I moved south towards the old oyster jetty. It took about an hour to find the next fish. 45 cm long, it was sitting on a sandy patch of bottom, in the middle of the weed beds, just east of the big sand bank and south of the jetty. I then caught three more fish from the same patch of sandy bottom, in quick succession. They were all just over 40 cm long.

I carried on wading south. After no luck for a while I swapped to a Zman Minnowz paddletail soft plastic, in the Opera colour. This one stirred up another flathead, after a few casts. It was probably about 35 cm long. I carried on with this plastic for another 20 minutes and kept moving. Then I swapped again, this time to a GULP 3” Minnow in the Sardine colour. Once more the change of offering produced a fish – but again it was under the 40cm legal size limit.

As low tide approached I had to give up for the day. Despite the cold water and wind, there were still a few fish around.

Here is a very old report that I forgot to post. I am ashamed to say that I did not wet a line in July. It was not just because I was afraid of freezing my nuts off.  The requirement to find some money briefly diverted me from my true purpose. I was out again yesterday, at Bribie and things were very tough and cold. I will post that report later.

So here is a report for 18th of June. I arrived early – about 5.30 am and there had been some very could south westerlies in the preceding days. The forecast was for a 15 knot south-westerly, first thing, but the wind was actually much lighter.

I ran into Dave, a keen local fisherman who works for fisheries. He told me about the fisheries Keen Angler programme – you can find out more at http://www.daff.qld.gov.au/fisheries/monitoring-our-fisheries/recreational-fisheries/get-involved-in-fisheries-monitoring/keen-angler-program. The program website has links to research updates and species population structures, which are quite interesting.

It was a bright clear morning. The water was fairly clear but the big night time high tide had lifted the weed. I waded past a dead flathead carcass in the shallows. Perhaps it was a fish that had not survived a release. The pelicans, kites, cormorants and wobbegongs usually tidy these up pretty quickly. There were a couple of Pelicans cruising the flats and it looked like they were chasing the tiny squid that I keep coming across. 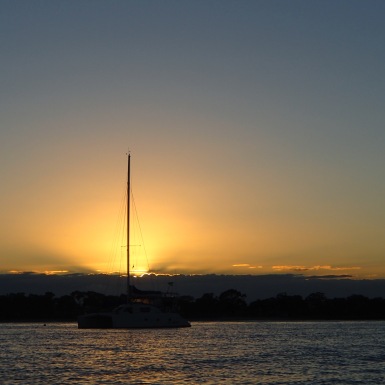 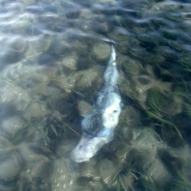 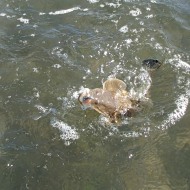 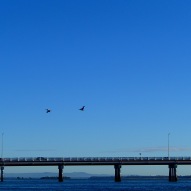 Low tide was at 7.37 am. In theory it should have been perfect session. I could access all the fish holding areas at the bottom of the tide and the wind was not strong enough to make things difficult. But, in practice it was pretty tough.

After cycling through a few bigger soft plastic jerkshads I swapped down to a 2” GULP Shrimp (floating) in the grey colour. I understand these new floating GULPS are designed for targeting Bream in the upper water column – but that only works if you put them on zero weight jigheads, which I have always found impossible to cast. I picked them up because I could not find any in my favorite Peppered Prawn colour. The floating ones are made of a different material (to make them more buoyant) and they do not look as appealing.

But Flathead will eat anything and about 30 metres south of the end of the old oyster jetty, I caught a 43cm model. I gradually waded all the way along the big sand bar to the green channel marker and after swapping back to a GULP Pearl Watermelon coloured jerkshad, I found a slightly smaller flathead. I turned back and about half way between the jetty and the marker I caught another, similar sized Flathead on the same soft plastic.

As I waded back to the car the dolphin family arrived and started hurling themselves around under the bridge.  Beautiful day, fantastic scenery but the fish were hard to find.