On Friday I was back on home turf and had a few hours clear in the morning. I set the alarm for 4.00 am and drove up to Bribie to see what I could find. I passed through a few showers on the way up from Brisbane, but by the time I waded out under the bridge, at about 5.00 am, the rain had stopped.  The tide would be running out and would be low at 8.20 am. There was not much of a sunrise but the sky was getting lighter, as I waded south towards the old oyster jetty. I was fishing with my light spin rig – Loomis TSR rod, Shimano Stella 2500 reel, 10lb braid and 10lb fluorocarbon leader.

I started by fishing with a GULP 4” Minnow in the Pearl Watermelon colour. This is always what I start with when I am not sure what to start with. It’s a consistent performer and looks just like a small pilchard or mullet.  I was using a 1/8th ounce, size 1/0  hook jighead. At about 6.15 am, I was 30 metres to the south of the jetty, I felt the tug of a flathead, dropped the rod tip and paused. I lifted and hooked it. It was a decent fish just over 50cm, I photographed and released it. 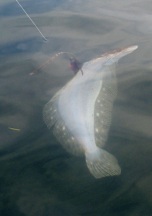 The clouds thickened and I got a light soaking. I waded further south. The bites were few and far between. I swapped to a GULP Jerkshad in the Cajun Chicken colour and this produced a bite on the first cast. I threw it back in the same direction and paused for a little longer. This time I hooked it. It was a small flounder. I have never really found one big enough to eat here, but I live in hope.

By about 7.00 am I had reached a point about half way to the green channel marker. I was hopping the jerkshad along the bottom towards me. Just as it reached me a flathead popped up and engulfed it. It turned as it tried to swallow and hooked itself. It was a very solid fish, so I let it take some line and started slowly wading back to the sand bank, behind me. It pulled hard but after a few determined runs it gave up and came with me. It was a great flathead probably just under 70 cm. I took a few pictures and released it.

I returned to about the same spot and swapped to a GULP Jerkshad in the Orange Tiger colour. After a few more cast, this lure caught another 45cm flathead and, a few casts later, a slightly smaller one. It was now about 7.30 am so I waded back towards the bridge. I caught two more very small flathead on the way.

By 8.00 am  with more rain threatening and a slowing tide, I gave up.