Apologies for another long gap between reports – no excuse is adequate for neglecting ones passions, so I wont offer one.

On Wednesday the rain would take a break and it looked like the south westerlies would drop off a little, in the morning. I have not had much time to fish lately, so this small window was good enough for me. Low tide would be at 0.7 m at 11.00 am, so I did not need to rush out too early.

I arrived at the west end of the Bribie bridge just before 9.00 am. I pulled on my waders. The wind was up but the sky was an amazing blue. The sun was out and this took the edge off the cold westerly wind.

It was about a week after full moon. It had been raining fairy constantly over the last week but it had not been very heavy. The water still looked clear. I was expecting the fishing to be pretty tough so I started with an 8lb fluorocarbon leader and a GULP 2” Shrimp soft plastic lure in the Peppered Prawn colour. I waded towards Moreton Bay, casting my soft plastic back towards the bridge. 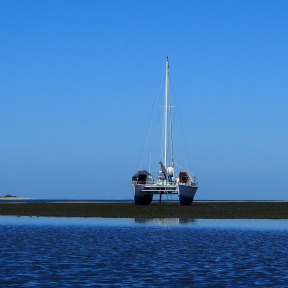 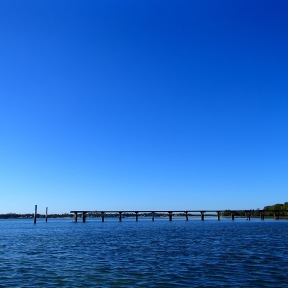 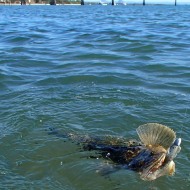 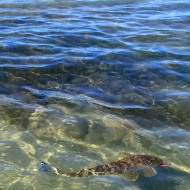 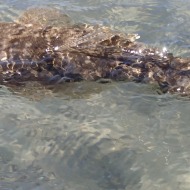 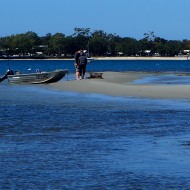 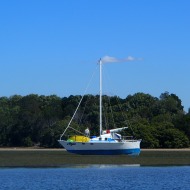 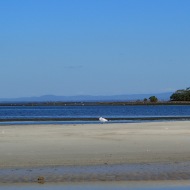 I felt a few grabs and swipes from what I assume where pike or small Moses perch, but I could not find any flathead to the north of the old oyster jetty. By 9.30 am, I was about 50 metres to the south of the jetty and I felt a bite from a sandy patch in the shallows. I did not hook up so I put the soft plastic back in the same place. On about the 5th cast in the same area, I connected and this time I successfully set the hook. It was a 35cm flathead which I released, after a couple of photos.

After 20 minutes more in this area I decided to move further south and swapped to a 5 inch, GULP Jerkshad in the Cajun Chicken colour. At about 10.10 am, I caught the first keeper size fish of the day. It was lying close to the edge of the large sand bank, which is gradually exposed in this area, on the run out tide. It was about 45cm long and went in the bag for dinner.

I hoped I had now found the fish but it was not to be. In fact, it took almost hour to find another flathead that was big enough to keep. Just after 11.00 am, I had almost reached the green channel marker. The tide had slowed right down and was about to turn. I cast out towards a patch of sandy bottom beyond the weed and let the plastic sink. Just as I hopped it over the edge of the weed, a flathead shot up and grabbed it. After a good initial strike and long run, I was very conscious of the 8lb leader, but I soon had the fish subdued and slid it into the keeper bag. Having caught so few fish of late, it felt much bigger than it was – it measured just 46cm.

That was it for the day I kept casting on the way back to the car, but caught nothing more.