It was back to work in February so there was little time for fishing. In March the hot days continued with no sign of autumn on the horizon. The usual wind pattern was a light south easterly or south westerly in the morning, turning around to a strong northerly in the afternoon. The water stayed pretty warm.

The Brunswick River was crystal clear. In the transparent warm water, I resorted to casting out almost unweighted 3 inch minnow soft plastics on very light 6lb leader, in order to entice the bream to bite. I caught a few keepers this way but I lost plenty of soft plastics to either bigger bream, cod or perhaps mangrove jacks. There were a few flathead around but most were about 30cm to 40 cm long, so I released them.

There was about a week of heavy rain later in the month. The water running off the surrounding swamps turned the Brunswick River brown for all but an hour around high tide. This increase in fresh water in the system changed things and I had a few sessions where all I caught were grunter bream. I caught them all on 3 inch soft plastics, using a 10lb fluorocarbon leader. They were mostly too small to keep, but one or two were close to 35 cm.

So there were plenty of fish in March and the river had plenty of bait but there were not many big enough for supper. 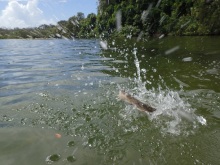