It was time for a change of scene. Despite the clear sunny days the water is still very cold. I wanted to give the waders a rest and fish from dry land. It was full moon and I had heard a few reports of decent Tailor on the Gold Coast beaches. I looked at wind and tides and thought the rocks around Fingal Head would be as good a place as any to try. The wind was forecast to blow hard from the south and then drop off for a few hours around dawn. High tide would be at 8.00 am.

I arrived just before first light and walked across the causeway on to the main platform. There were a couple of keen anglers already in position. But no-one had landed anything yet. Now the good folks at DUO lures sent me a great selection of big hard bodied lures to try out. On recent trips, conditions have not been right for them, but I have been itching to get them in the water. This morning looked perfect.

I started with the Beachwalker Vib 100. This is a 100mm sinking vibe lure with a very tight action. It casts like a bullet and weighs 21g. I had the Chigamori Sardine colour (silver/blue). I was fishing with my heavy rock fishing rig. The reel is a Shimano Stradic 8000 spooled with 30lb Platypus braid and a 30 lb fluorocarbon leader. The rod is the 9’6” Daiwa Demonblood. This rig is great for throwing lures from about 10g to 85g, from the rocks. I cast the Beachwalker Vib 100 and let it sink, a little. I took up the slack and retrieved the lure in short jerks, to get the most out of its tight action.

The sun was about to come over the horizon and I felt the lure get nudged a couple of times. I moved round from the eastern side to the northern side but kept casting parallel with the edge of the rock platform. There was not much swell but the wind was picking up fast from the south and this was creating plenty of foamy water, at the base of the rocks.

I had been casting for a good half an hour and the arms were getting tired. Then, suddenly a fish slammed the Beachwalker Vib about three metres from the rocks and took off. It’s been a while since I tussled with a Tailor and there is plenty to remember, especially when trying to land them from the rocks. Perhaps the most important thing to keep in mind is that Tailor have soft mouths, so you need to apply constant but steady pressure. If you lock up the drag and try to use brute force you will just pull the hooks out. But you must balance this slow and steady approach with the need to get the mad, leaping, head shaking fish out of the water, before it snaps your line on the rocks or shakes itself free. Both trebles on the Beachwalker Vib 100 had lodged in this fish so I did not have too much trouble. I gradually worked the fish to the base of the rocks and then grabbed the leader. It was a 44cm Tailor. I bled it and then started looking for another.

After a few casts I lost the Beachwalker Vib 100 to a rock on the bottom so I had to try something else. One of the other fisherman had just caught a slighty bigger tailor on a 45g slug. I looked at my DUO selection and decided to stick with the DUO Beachwalker range. I pulled out the Beachwalker 120 MD. This is essentially a sinking Minnow designed to swim about 1m below the surface. It has three trebles, weighs 21g and is 120mm long. It is specially designed with internal Tungsten weights to cast well in windy conditions. It proved itself immediately as I cast it directly into the southerly wind that was now up at about 20 knots. It travelled almost as far as 60g slug would have. I had chosen a rainbow coloured model with a red belly, black back and just about every other colour down the sides.

I moved around to the northern edge of the platform to get out of the wind. I cast around without success so I decided I would have to brave the wind on the eastern edge. I moved over and cast to the east. The lure shot straight out into the wind. DUO had sent the lures without hooks so I had added the split rings and the trebles. I felt a solid hit and the fish was on for a while then it was gone. When I pulled in the lure, the middle treble was missing. I checked the split rings and realized they that I had put on some lightweight, Force 10 ones. The Tailor had just pulled the treble off the lure buy straightening the ring. I did not have replacements so I carried on. On the next cast, the fish hit the lure a few moments after it hit the water. It was another Tailor, about the same size as the previous one – about 45cm. I played it carefully to the rocks and pulled it clear of the water. The trebles had held but the split rings were starting to stretch. 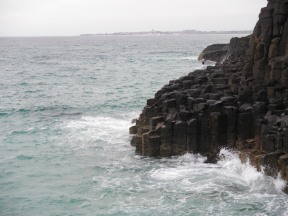 Grey and blowy – good for Tailor 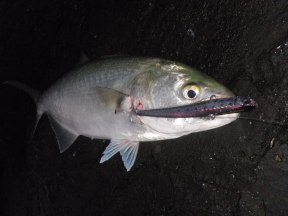 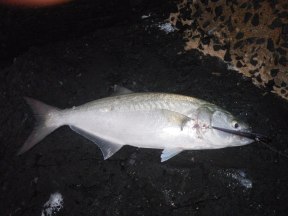 Great lure with a tight action

The DUO Beachwalker MD 120 – great for casting in the wind

One treble down on the DUO Beachwalker 120 MD

The rough water on the eastern edge seemed to be where the fish were. I cast slightly south-east and could see the dark silhouette of the lure wobbling its way over the sandy bottom. I repeated this trajectory about 4 times and then, about 5 metres from the rocks I saw three fish swerve up to attack the Beachwalker 120 MD. One connected and I was on. This was a bigger fish and the swell and steeper rocks on this side of the platform made landing it more difficult. I got it to the foot of the rocks but as I lifted it, by the leader, another of the split rings gave way and it dropped down into a crevice. I grabbed it through the gills and got a knee full of barnacles, as I did so.

This was the best fish of the day at about 55cm. The wind was now howling and the Beachwalker 120 MD only had one treble left on it so it was time to give up. The DUO lures had performed well. They are superb quality and really do what DUO say they will. They seem to consistently catch fish for me so I would not hesitate to recommend them. I see they are now appearing on the shelves in many more tackle stores in Australia and a few online retailers are also stocking them. If you want to know more about the range – contact Steve at sales@swldistributions.com.au.

I went home to nurse my knee and change the split rings on all my DUO lures (my fault, not theirs). It had been a great session and I will be back for more soon.