I was delighted to be back on home turf but shocked at just how early sunrise is. With first light just after four you have to be up at three. Low tide at Bongaree, on Bribie Island would be at 5.10 am. At first light, I would just catch the last of the run out tide – which is usually a very good time to fish.

As I pulled into the car park beside the bridge, on the mainland side, I saw Colin’s car already parked up. Colin is the local flathead specialist -great minds think alike! I pulled on my waders and wandered out for a chat. He was chucking a few hard bodied lures around under the bridge and soon found a small flathead. He gave me an update on what has happening in the Passage and, as always it was a comprehensive briefng.

It was now about 4.45 am, so I set off to fish the weed beds, to the south of the old oyster jetty. It was a big tide so I had a good view of how the drains and channels had changed in the the 3 months that I have not fished here. The weed beds are thick and healthy but the drain that used to run out round the corner from Sandstone Point, is now much less well defined. The persistent northerly winds may have flattened the sand banks, a little.

The breeze was light but quite cool, from the south-west. I started fishing at about 4.45am and the tide was still running out. I was fishing with my new G.Loomis Trout Series (TSR) spinning rod. I was using a 10lb fluorocarbon leader tied on to 10lb Super PE braid. This rod is excellent but I am still getting used to its sensitivity. Pulling a soft plastic through the weedy bottom was confusing at first, I thought I was getting bites but was not sure. Then I saw a few skid dart past and I realised they had been biting the plastic.

I kept moving south. The sun came up behind the clouds. I started fishing with a GULP 4″ Minnow in the Smelt colour. This caught a couple of small flathead just after 5.00 am. Then there was a pause, as the tide turned. I swapped over to a GULP 5″ Jerkshad in the Watermelon Pearl colour. 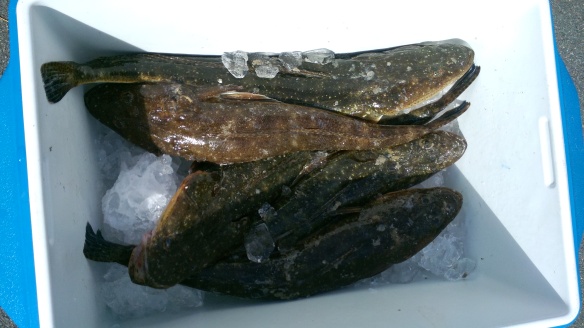 An esky full of Bribie flathead

At about 5.45 am the incoming tide picked up pace and I found a patch of keeper size fish. Over the next hour, I caught 12 fish along a 50 metre stretch of the weed beds. I kept five but forgot my camera. So all I have is the full esky to show you. The smallest fish was 44cm and the largest 59cm. I caught most of the keepers on the 5″ GULP Jerkshad but also found a few with the Zman Minnowz in the Redbone colour.

It was great to have such a successful first session back on home turf.

After a rubbish session at Bribie Island on Thursday morning, I decided to go back to Caloundra again on Saturday. It would be the usual wind pattern – virtually no breeze pre-dawn, building to a solid 15 to 20 knot north-easterly by about 11.00 am. 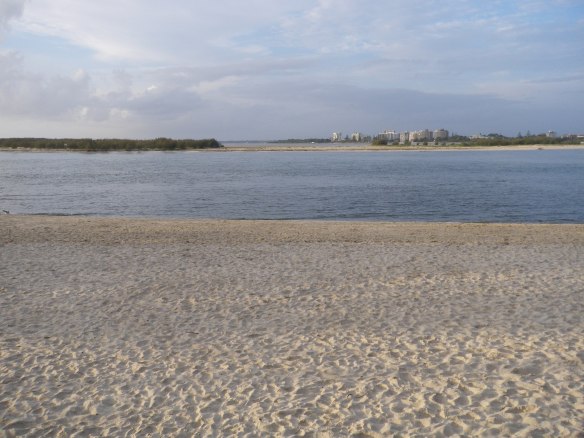 The view from Bulcock Beach - just after dawn

The new moon had risen on Friday, so it would be a big, fast running tide. High was due at 8.40 am and would be 2.1 metres. I arrived at Bulcock Beach at about 4.00 am to find the water just starting the run in, with some force. The blowy weather and rain of the previous few days has stirred the water up and visibility is very poor. There is also a bit of sediment and floating around. I started off fishing with a GULP 4” Minnow in the Pearl Watermelon colour, on a 1/8th 1/0 jighead. I was walking along the shore, under the board walk, casting close in to the shore. Just on first light, I caught a small Flathead – about 35 cm long. I carried on up to the rocks at the mouth of the Passage and caught nothing else.

I moved down to the flats and weed beds in front of the Power Boat Club, just south of Golden Beach. The water was flooding over the flats when I arrived. I tried a Strikepro hard bodied, bibless vibe lure for a while, but there was a lot of sea grass floating around and the lure was getting fouled up on every cast, so I switched back to a soft plastic lure. I chose the GULP Crazylegs Jerkshad in the Lime Tiger colour. I hoped the fluttering tail might draw a strike.

I moved further north across the flats in ankle deep water. I cast along the edge of the channel, bouncing the soft plastic along the bottom. The water was still very murky, with the strong tidal flow washing around a lot of debris as it approached high. 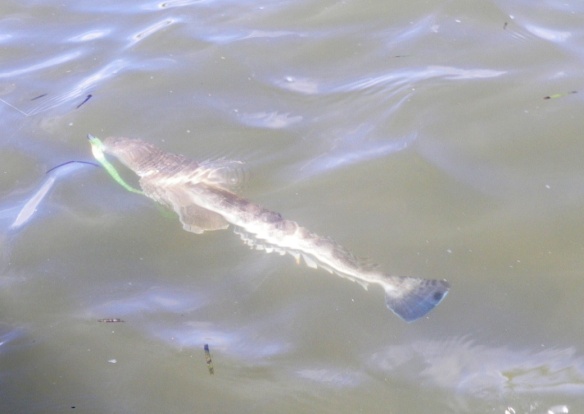 After about an hour of fishing this area with the hard bodied lure, I had not found a fish. Three casts with the soft plastic – and I had one. It was no monster – a Flathead, about 45cm long. I released it and spent the next few hours trying, in vain, to find another.

A bit of a frustrating session – but the fish are there. 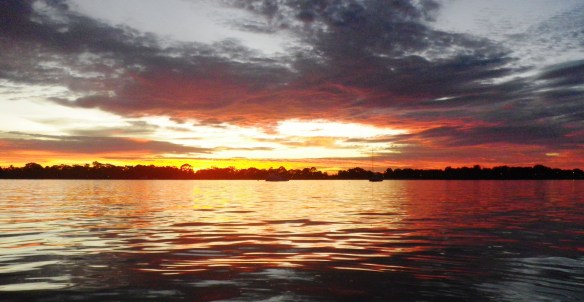 Back up to Bribie Island for a quick Sunday morning land based fishing session on the flats. With low tide at 6.00 am, just on dawn and a light south-westerly wind. I took advantage of the exposed flats to walk, then wade all the way down to the green channel marker, by the old oyster leases, at Sandstone Point. Along the way I caught a few more monster Pike.

The bigger Pike have some serious teeth

From about 6.45 am to 8.45 am, I waded slowly back towards the Bribie Island bridge, about 15 metres out from the exposed sandbar, casting all around. I fished with the GULP Crazylegs Jerkshad in the Curried Chicken colour, rigged on a 1/6th 2/0 jighead and also the 4” Minnow in the Pearl Watermelon colour. I caught a total of three Flathead – two keepers; 64cm and 48cm and one that was two small and numerous big Pike, between 30 and 45 cm. I caught the biggest fish just to the south of the channel marker at about 7.00 am. It was lurking on the edge of a weed bank.

I covered a lot of ground for only a few fish, but they can be hard to find when the tide run is fairly weak, as it was today. It’s a good way to keep warm and burn a few calories! I am waiting for my Daiwa Demon Blood to get fixed (I bent a couple of the guides) and then I will head for northern New South Wales to chase some fish from the rocks. It is getting too cold to be standing in that water at 5.30am!!