Every time I fish at Shark Bay, near Iluka in Northern New South Wales,  I clean my fish in the rock pools. It is not uncommon to have an octopus stick a tentacle out and grab some floating fish guts or watch a crab sneak out to grab a free meal. But without fail, about three to five minutes after first drawing blood, the wobbegongs arrive.

Last time I was down there I caught a tiny moses perch on a big DUO lure and got mugged as I reeled it in. Watch where you are paddling in those rock pools!

Friday was my last morning in Iluka. The weather had been good for fishing – light winds and swell. But it had been miserable for camping, with endless rain showers and no time to dry out in between. Fortunately, I had been in a cabin.

A big south-easterly blow was forecast for the weekend and on Friday morning; it was already about 15 knots on the Woody Head platform. The seas had not really picked up yet but it would be too hard to cast from ‘ the Barnacles’ so I decided to give the Shark Bay rock platform a try. This is a great spot in a south-easterly wind, as you can cast off the north tip with the wind behind you.

I arrived just after 6.00 am. The sky was fairly clear, initially. Low tide had been at about 3.40 am. The wind was blowing hard so it would only be possible to fish on the north edge and cast to the north-west. These were perfect conditions to get some long casts out of some hard bodied lures.

I knew there might be some big fish around but I have really enjoyed fishing with the lighter 10 ft Shimano Catana Coastline Light, this week – so I stuck with it. It is rated 3-5kg, but as long as you have a tough leader and a good drag, it can land some pretty hefty fish. When I break it (which I inevitably will) I will look for a better quality alternative – but so far, so good.

It has a poor reputation for durability and most coastal tackle shops have put their fair share of new tips on. Despite this, it is a very nicely balanced rod and I particularly like the way you can feel the action of the lighter hard bodied lures through the tip. I really wanted to catch some fish using my latest favourite DUO lure – the Realis Jerkbait 120SP and the Catana is perfect for it. The Realis Jerkbait 120SP is a clever sub-surface suspending lure that you can get down to about a metre below the surface without too much trouble . It is long (120mm) thin and flat sided, which accentuates light reflection, as it moves through the water and it has both a good slow and fast action. I have had a few of these in some great colours and lost them all to fish.

Now I was down to my last one, in a yellow/ cream/ gold colour known as S70 – Dead Ayu. I have swapped the trebles for single hooks, in the hope of hanging on to the lure for a bit longer! I had lost one to a good fish a few days before so I was determined to land something with this one.

I cast to the northwest into the choppy, white water. There is a patch of reef that breaks the surface, about 125 metres to the north-west of the rock platform. I aimed at this and with the wind behind me, I was able to put in a very respectable long distance cast. I started the retrieve, jerking the lure along for a few metres, then pausing and allowing it to suspend. There was action behind the lure on the first cast with splashes and surges, but it took about six casts to hook up.

I am fairly new to single hooks and my view is that they do not connect with as many fish as trebles do, but once they do connect, the fish stays hooked. That was the case this time and I soon had a 40cm tailor at my feet. I cast straight back out and watched as another tailor knocked the Realis Jerkbait 120SP out of the water but then failed to get hooked. Almost every cast was getting hit. Sometimes I could see the snouts and tails of long toms but usually, it felt like tailor.

About 10 minutes after the first tailor, I was on to another better one. This one put on an acrobatic performance with several jumps, before I tamed it. It was just over 60cm and the best of the week. There then followed a good tailor session with the DUO Realis Jerkbait 120SP accounting for six tailor around the 40 to 45cm mark, over the next 20 minutes. It also pulled up a couple of over enthusiastic long toms.

The first of the day was just over 40 cm 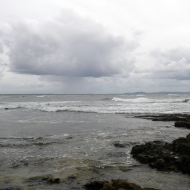 The rain clouds never gave up 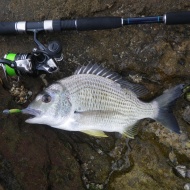 At about 7.00 am things went quiet so I swapped to a 65g Raider metal slug. I tried this for about twenty casts with no result, so I swapped to a soft plastic lure. I started with the small GULP 3” Minnow in Lime Tiger, that had proved so appealing to the mac tuna. I put it on a ¼ oz, 1/0 jighead and cast it out. There were no more tuna but after a few retrieves another good bream took it. I landed it and then caught another.

There was another quiet spell so I swapped to a bigger GULP Jerkshad in the Sweet & Sour Chicken colour. The tailor must have been passing through again because after a number of bites, pulls and aborted runs, I hooked up again. It was another 40cm fish.

The tide was now almost up to my waist so it was time to retreat. It had been a great session and good way to end the week. Bream, dart, tailor, tuna, trevally and flathead – another great week of fishing in Iluka.

The wind started a little cool from the south west but was forecast to move round to the east and north east. The tide would be too full to fish the dawn at Woody Head, so I decided to give Middle Bluff a try again. I arrived in the pre-dawn light, just before 6.00 am and immediately set to work with the heavy rig. I started with 3/8th oz, 3/0 jighead and a Gulp Jerkshad in the Pumpkinseed colour. The bommie, beside which the jewfish lurk, was covered in wash and the sweep took a few of my lures in quick succession. I had done too much of this the day before, so I changed tactics.

The sun was up and I moved right to the north end of Middle Bluff. I switched to the light rod with 16lb leader and put on a 1/6th oz, 3/0 jighead. I started with a GULP Crazylegs Jerkshad, in the Lime Tiger colour. I could just about cast the lure out, over the edge of the fringing reef and leave it there for a few seconds. Then I would have to quickly retrieve it with a wave, that was breaking over the reef. After a couple of casts, I lost the tail of the soft plastic, so I put on another. Each time I retrieved, small baitfish leapt ahead of the lure, as it approached the reef edge. After about three casts, a fish grabbed the lure right at the edge of the reef. I let it have some line and looked for a wave to bring it over the reef.

I had not caught much in the few days previously and I was a bit too eager. As the next wave washed over the edge, I pulled a bit too hard and the hook came out. I did not get a good look at it, but I would say it was more likely to have been a tailor or trevally, than jewfish.

I threw a lot of lures at this spot over the next hour, with both the light and heavy rod. After about twenty minutes one of my GULP 2” Smelt Minnows was bitten off right next to the edge, but that was it, I did not hook anything else. By about 10 am the water was surging over the rocks too often and I had to move off. The fish were definitely there, but they had again proved hard to get at.

By late afternoon the north-easterly breeze had picked up. I decided to try fishing at Shark Bay, to the north of Woody Head. This is another spot that is only really accessible around low tide. The rock platform at the southern end of the bay is exposed for a few hours either side of low. There is a large patch of reef just north of the main platform and the channel between is often a good target area.

The sea was fairly flat here. I decided to start with the light rod. I tied on 12lb leader and a 1/6th oz, 2/0 jighead and loaded a GULP 2” Minnow in the Banana Prawn colour. I cast north and waited for the lure to sink. As it did so,…….bang, it was hit on the drop. The Shimano Catana Coastline bent over and took the lunges. After a few runs I reeled in another good size bream.

A few casts later I pulled in a tiny Moses Perch and then I started to lose tails to some rapid hit and run attacks. I decided to put a bigger lure on and loaded a GULP Crazylegs Jerkshad. On the first retrieve it was slammed. I knew it was a tailor from the mad head shakes. I wound in steadily and soon had it by my feet. It was about 40 cm long. Over the next hour I had several more plastics mangled, but could not hook up. At one point I saw a couple of long toms following the lure in. At about 7.00 pm, exhausted, I gave up for the day. 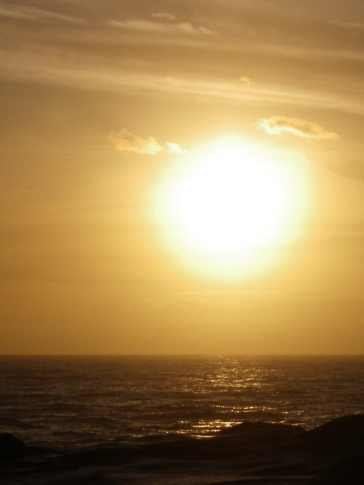 A hot sunrise at Middle Bluff

The bream were good quality but hard too find

Fishing between the rocky outcrops at Shark Bay

Lost a few soft plastic lure tails to these fish

The wobbegong arrived as soon as blood was spilled