Thursday was another clear warm morning. It had rained overnight but the wind had disappeared and there was only a light northerly blowing when I woke up.

I walked round to the corner of Connors Beach again. I started at about 5.30 am with a large River2Sea Dumbbell Popper. This produced nothing so I swapped down to a 65g Raider metal slug. This also could not find any fish.

I swapped down to my Daiwa Air Edge Surf 96 L rod and put on a 1/6th ounce, #1/0 hook jighead and dropped down to 12lb fluorocarbon leader. I loaded the jighead with a GULP 4” Minnow soft plastic in the pearl watermelon colour. After a few slow retrieves I felt some good bites. The tide was running out and there was a strong current pushing water along a pronounced gutter, at the base of the rocks. I let the soft plastic sink in the fast moving current and the when I lifted the rod tip I had a fish on it. It was a 25 cm bream. The next cast yielded another one – slightly bigger.

Things went quiet for a few casts. Then, at about 6.15 am something grabbed the soft plastic at the base of the rocks and tried to bury itself. It was not particularly quick but it was much more powerful than the bream. It wedged itself down between some rocks so I loosened the drag and gave it some slack. A few moments later, it swam out and I landed it. It was a fairly solid Spotted Hind – a pretty fish that does not taste much good – so I let it go. By about 7.30 am I was not getting any bites so I gave up for the morning. 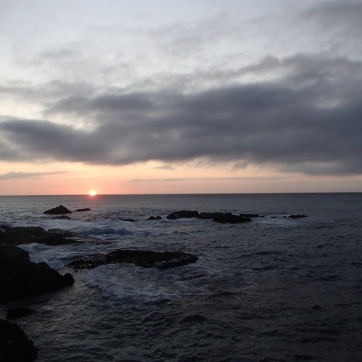 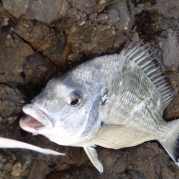 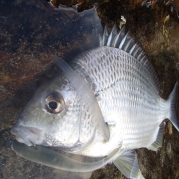 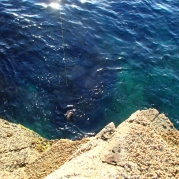 FIsh at the base of the rocks 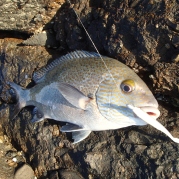 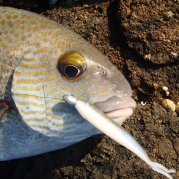 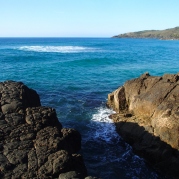 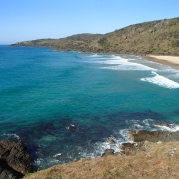 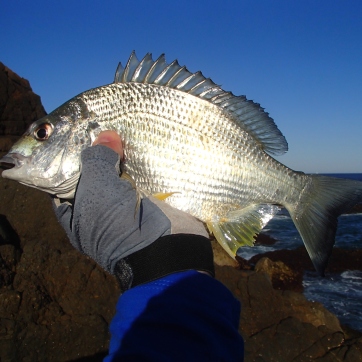 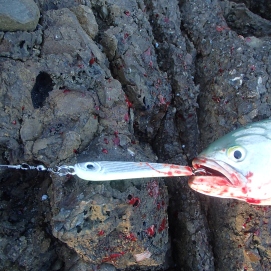 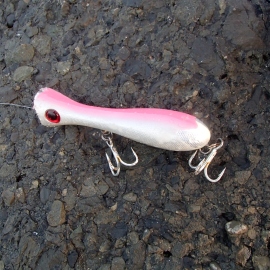 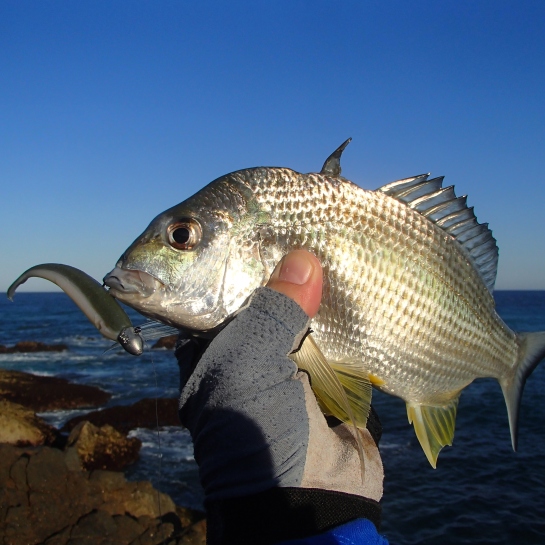 At about 3.30 pm I came back for an afternoon session. After a few casts the first taker, on the same light rig and soft plastic, was another bream. It was followed by two more – neither was much more than 25cm long and the third one looked like it had been in the wars.

As the sun dropped and we moved closer to 5.00 pm, I tied on a small 45g cheap, cream painted metal slug. I cast out to the north east, in the direction of a patch of semi-submerged rocks. I wound it in fairly quickly and saw a couple of swirls come up behind it, about 15 metres from the shore. I carried on casting for about 20 minutes, varying the speed of the retrieve. I could now see the tailor following the slug in, but they would not bite.

Just as the sun was setting at about 5.30 pm I felt a solid bite and then the rod tip bent over. I dropped the first tailor a few metres from the shore. A few casts later I had another on and this time it was solidly hooked. I landed it and released it. I connected with a couple more but did not land them and at about 6.00 pm, I gave up.

It had been a great week of fishing at Hat Head. The scenery is truly fantastic and I will certainly be back.