The forecast was for a 10 knot northerly wind which looked good for a quick fishing session. So I drove up to Bribie, to fish the run out tide on the old oyster jetty flats. It was a few days before full moon and the tides were getting big. It had been a 2.39m high tide at 7.35 am. Ideal fishing time on the flats would therefore be between about 10.00 am and 1.00 pm. 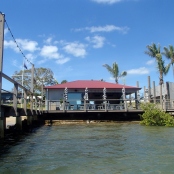 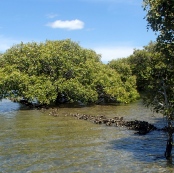 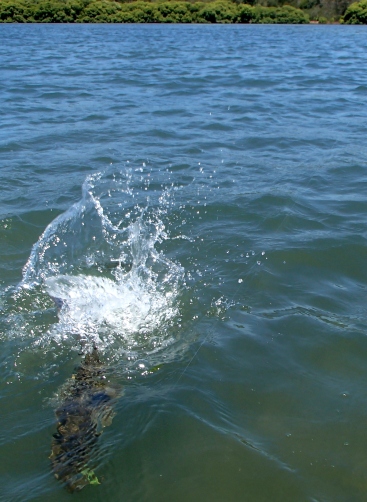 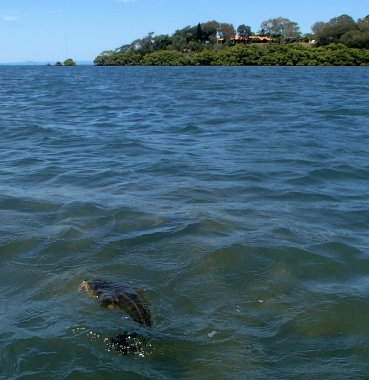 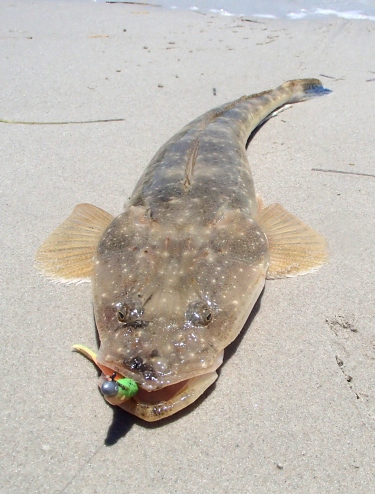 I started fishing at about 9.30 am. I rigged up my light spin ring and waded out under the bridge. There was still plenty of water so I cat around under the bridge for a while. I did not get any bites and the high tide meant there was a lot of weed floating around so I decided  to wade south alongside the mangroves and fish around the corner on the Sandstone Point flats.

On a big tide these flats are covered in 2 metres of water in places and there is plenty of structure and food for the fish that move up into these areas. There are a number of piles of oyster covered rocks and the remains of some old fish traps and old oyster racks.  There are also some big weed beds and patches of sandy bottom.

Today I could see some big mullet schools finning around and as I came around the corner I saw a couple of small tuna, of some kind, chase a school of smaller baitfish into the shallows. I was initially fishing with a GULP 4” Minnow in the Lime tiger colour. I was using 10lb fluorocarbon leader and a 1/8th ounce, size 1/0 jighead. I saw a few long toms grabbing at the plastic and hooked and then dropped one. They seem to love this area.

The wind was picking up and now coming from the north-east at about 20 knots. I was about waist deep behind a mangrove island and fishing alongside a small submerged rockwall. I felt a solid bite but struck a little too quickly and probably pulled the lure out of the fish’s mouth. I cast back in the same spot about five times and on the sixth the fish struck again. This time I dropped the rod tip for a full ten seconds and when I lifted it again I hooked the fish. It was a healthy looking 45cm flathead and I kept it for dinner.

It was now about 10. 45 am and I could not find any more fish around the mangrove island so I wandered back towards the main channel. There was still plenty of bait around and a cormorant was successfully fishing in the shallows. I waded along the sand bar that runs down towards the green channel marker, casting along the edges of the weed. I was now in less than a metre of water and the tide was running out quickly.  I felt a very aggressive smash and grab and a fish took off with the same Lime Tiger Minnow. It was a bigger fish and after a short fight I pulled it up onto the sand. I later measured it at 63cm.

By about 11.45 am the wind and weed were making fishing just too hard. I am sure the fish were there but I did not have the patience to carrying on battling the elements to find them.

I only had time for a late morning fishing session today, so I drove up to Bribie Island for a couple of hours this morning, from the 10.00am high tide through to around noon. The wind had dropped significantly, since yesterday. There was still plenty of weed floating around but the water was a little clearer.

I caught a couple of Flathead that were just about 40 cm long. I got the first under the bridge, on the island side, using a GULP 4” Minnow in the Pearl Watermelon colour and the second down on the sand flats, in front of Buckley’s Hole, on a GULP 3” Minnow in the Lime Tiger colour. I was fishing with a 1/6th 1 jighead. Hopefully the calmer weather and smaller tides will mean that the weed will start to settle down for the next week or so.

Unfortunately paid employment has limited my fishing opportunities of late. The weather has also made things tricky with some windy mornings. Sunday was not ideal but I had to get my fix. I arrived at Bribie Island about 5.45 am and conditions were better than I expected. The tide was running out and would be low at around 9.00 am. The wind was from the south at less than 10 knots, but it was building. 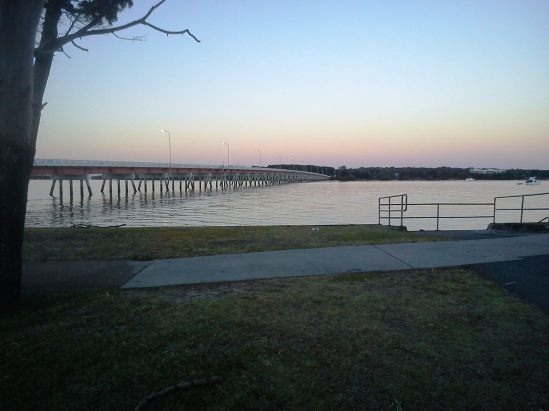 I started under the bridge on the island side. After a few casts I could see there was a lot less of the clinging ‘snot’ weed floating around. There was no surface action under the bridge lights. I decided to cast a soft plastic around just to the north of the bridge. After five or six casts with a GULP 4″ Minnow in the Pearl Watermelon colour, I felt a couple of bites. Next cast and the rod tip went mad. It was a Tailor just under 30cm. I caught a few more around the same size and then decided to move down to the mouth of the tidal lagoon, in front of Buckley’s Hole. 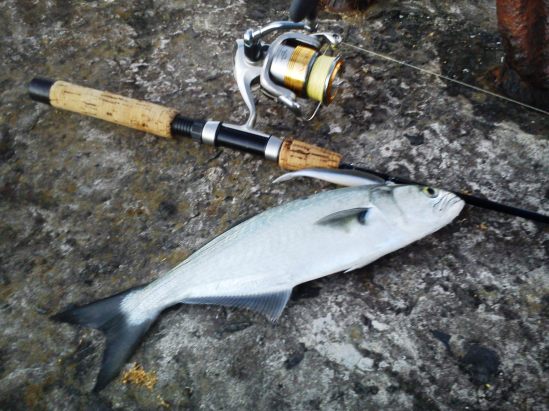 A 30cm Tailor - under the Bribie Bridge

I waded out just to the south of the new Bribie Island Seaside Museum. Looks very flash – but I would have preferred to see my tax dollar spent on something a little more essential! Like more gutting tables, hot showers and massages for tired fisherman, etc.

There is a small drain here, just to the south of the main island jetty, and on a run-out tide there are often fish around. After a few casts I had a Tailor – about the same size as the previous ones. I had switched to a GULP 5″ Jerkshad in the Lime Tiger colour. I let it go and carried on casting over the coffee rock drop off, that forms the edge of the Pumicestone Passage. I have not caught a Pike for a few weeks – I can only assume the marauding Tailor have either eaten them or scared them off. 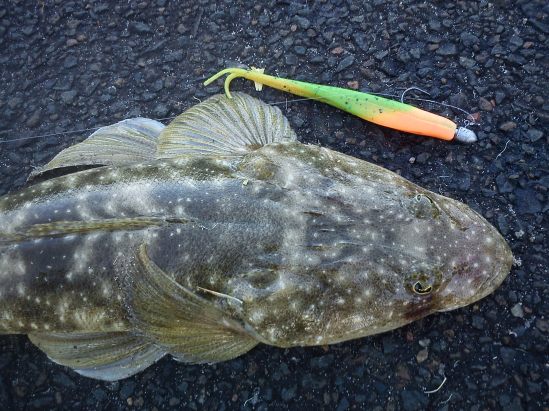 A few casts later a fish grabbed the plastic, just on the top of the ledge. It was slower and heavier than the Tailor, as I dragged it back to the sand I could see it was a Flathead. It was around 45cm – things were looking up.

I started to head south, casting out of over the ledge and gradually skipping my soft plastic in close to the edge. There were small ‘hardy heads’ all along the drop off and every now and then they would scatter as something smashed into them from below. I switched to a 3″ Minnow in the Lime Tiger colour. After a couple of casts, a fish grabbed it and tried to hide down under the ledge. I gave it a bit of line then tightened the drag and pulled it up and over. It was a decent Bream around 30 cm long. A few more casts produced another fish, about the same size. 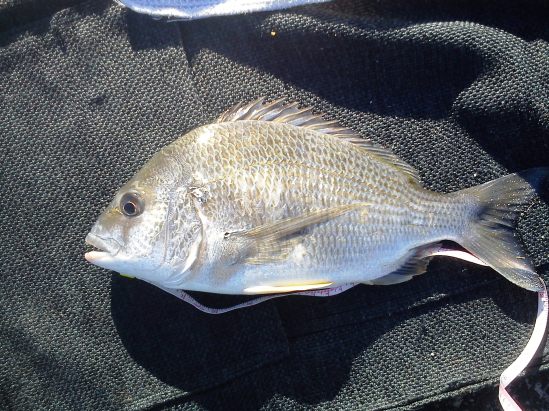 I carried on moving up and down the ledge for another hour. A couple of times I was bitten off by what I assume were Tailor, but I did not land any more fish. I was fishing with 10lb leader which is no match for their teeth, but necessary to tempt the Bream. Overall, it had been a better session than last week.