It was to be another land based fishing session at Brooms Head just south of Yamba, in Northern New South Wales. At dawn the wind was already gusting strongly from the south-east. It was forecast to blow up to about thirty knots during the morning but the area on the west side of the lagoon was sheltered by the Brooms Head Bluff. I decided it was worth an early morning wade.

Low tide was at 7.30 am and I was wading across the mouth of the lagoon, at the western end, at about 5.45 am. I had broken my lightest rod the day before so I was using my Nitro 7’6” distance spin rod and because of the breeze I had moved up to a heavier 1/8th oz, 1/0 hook jighead and 12lb fluorocarbon leader.

I soon found the fish. They were lurking just on the border of the rocky northern wall of the lagoon, where the weed covered rocks met the sand. I started with a Pike and then 30cm Tarwhine and then three of the striped Trevally. I released them all and with nicely chilled nuts, I waded back for a hot shower and breakfast.

Striped Trevally in the water

A Trevally grabs a soft plastic at Brooms Head

With the cyclone bearing down and the prospect of another wet and windy period, I thought I had better get out for a fishing session. So early Tuesday morning I headed down to the Tweed river mouth before dawn. I fished around the end of the rockwall for a couple of hours, either side of dawn but failed get a bite so, at around 6.30 am, I decided to head further south to Fingal Head, to fish the rocks there. There is no shortage of great rock fishing spots in Northern New South Wales. Fingal is another beautiful spot with some unique octagonal rock formations. There are good fishing locations in front of the lighthouse, all along the headland but my favourite area is just to the south of the main rock platform.

I started fishing here at about 7.15am. I was using my ROVEX Aureus 9ft rod with the SHIMANO Stradic 6000. It is spooled with 20lb Fireline and I had tied on a 25lb fluorocarbon leader. I attached ½ oz 4/0 jighead and decided on my favourite soft plastic lure for Jewfish – the GULP 5” Crazylegs Jerkshad in the lime tiger colour. On my first cast – I let the plastic sink to the bottom then jerked it back towards the rocks. As I lifted it clear of the water something took a swipe at it – but I could not see what. Next cast I slowed it down even further and let it drift in very close to the base of the rocks. As I lifted it I felt the bite, I dropped the rod tip, paused, then struck hard. I had a fish on and due to the proximity of the rocks I tightened the drag and just winched it up. It was a good size Tarwhine at just over 35cm.

The soft plastic was pretty mauled so I changed it for a new one in the same colour and pattern. I still had about half an hour of run in water before high tide. I got a good soaking from a passing rain squall but that was no hardship as it was so hot and humid. I was standing on the mainland to the south of the narrow causeway that leads out to the main rock platform. The water washes over the causeway at high tide and I was casting in to the area just south of it. The bottom is very rocky so inevitably I lost a few jigheads as my lures got snagged. After a couple of re-rigs I felt the line go taught and then the rod tip started wiggling and I could see silver. I waited for a wave to bring it up over the rocks onto the ledge below me. Then I tightened the drag and pulled the fish up successfully. It was a Jewfish, just on 50 cm long.

Four or five casts later I had the plastic down deep at the base of the rocks and again, I felt a solid bite and then lost a bit of line. Fortunately the swell pulled the fish out from under a ledge and on the next wave I brought it up, out of the water and onto the ledge below. Again, I winched it up to my feet and it was another Jewfish – perhaps a couple of cm smaller than the first.

I carried on for half an hour or so, but then the sky darkened and really heavy rain started, I decided to give up. I presume we will get some fairly big seas and rain as the cyclone passes through up north, but this might bring the Jewfish on in greater numbers. The challenge will be finding somewhere safe to target them. 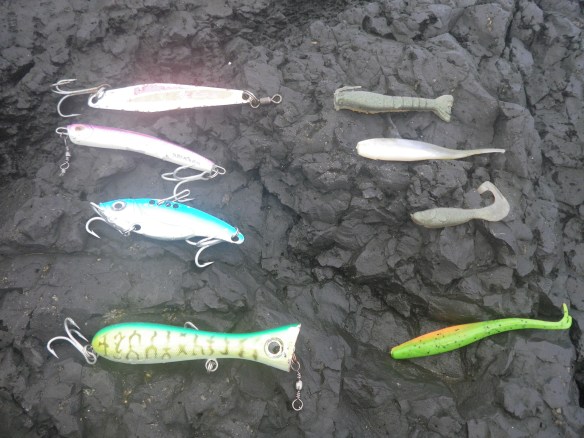 My lure arsenal for the Tweed rockwall

Oh dear , oh dear , oh dear – another morning with no fish. As I have said before, this is the worst time of the year for me. The main estuary species – Flathead & Bream – have long finished spawning and as the water temperature climbs and weather patterns get more unpredictable they get harder to find. Add to that – flooded river systems and constant changes in wind patterns and I get stuck focusing on the ocean rock walls and ledges.

In these locations the fish come and go with the bait and the wind. Tailor, Trevally, Kingfish, Queenfish and even good sized Mackerel and Tuna will all come in close to the rocks if the bait is around. The Tailor are particularly voracious in these situations and you can catch them on almost any type of lure or bait. The Trevally are sometimes harder to please, often limiting their feeding period to an hour or so either side of dawn and dusk. The other species require you to be in the right place at the right time and this means putting in the casting hours – and it can be a long time between fish!

This morning I arrived at the north rockwall, at the mouth of the Tweed River at around 4.00 am. The horizon started to glow just as I rigged up and I started by fishing soft plastic lures through the last of the run out tide. I switched to a surface popper for about 30 casts and put in 50 casts with an 85 gram metal slug. Nothing I used produced results. At one point a fellow fisherman caught a 30cm Tarwhine on a fresh beach worm, but that was the only fish I saw caught.

Apparently a few decent Trevally had been caught at dusk, on Friday and everyone was hopeful that this mornings session would produce fish – But it didn’t! I gave up around 7.30 am as another of this summer’s rain showers arrived.

Sometimes I feel like a dentist
Dawn dart
Far too many little lures, but they all catch fish
One of those days
Christmas mulloway processing